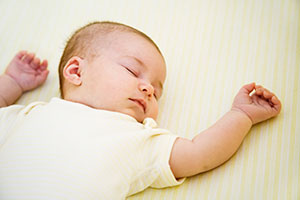 Back-to-sleep campaigns promoting safe sleep for infants have helped to reduce deaths from Sudden Infant Death Syndrome (SIDS) over the last 2 decades.  However, the numbers of sleep-related deaths from causes such as suffocation have continued to rise.  Sudden unexpected infant deaths—called SUIDs—due to unsafe sleep are a leading cause of preventable death under age 1 year, and occur at a rate of 12 per day in the United States.

In May 2011, the C.S. Mott Children’s Hospital National Poll on Children’s Health asked parents of children up to 3 years old about their infants’ sleep positions (past or present) and for their opinions about safe places for their infants (less than 1 year old) to sleep.

Most parents (89%) believe that placing an infant in a crib on his/her back is a safe sleep position.  However, 17% believe that an infant is safe on his/her stomach even if not able to roll over. More concerning is that 40% of parents believe it is safe for an infant to sleep in an adult bed with one other person (Figure 1).

Although back-to-sleep campaigns have greatly increased public awareness about the safety of infant sleep positions, the incidence of SUIDs due to unsafe sleep has increased over the same period. This pattern raises questions about parents’ current habits regarding their infants’ sleep.

In this Poll, most parents indicate they have heard the back-to-sleep message—with 9 out of 10 believing that infants sleeping in a crib on their backs are safe.  However, large subgroups of parents place their infants in unsafe sleep settings—either with soft materials that can put infants at risk for suffocation or by sleeping with infants.  Despite the back-to-sleep campaign one-fifth of parents still believe that an infant is safe sleeping on his stomach in a crib even if he cannot roll over.

These Poll results indicate that efforts to inform parents about safe sleep settings for children must continue if rates of SUIDs due to unsafe sleep are to decrease in the US.  One helpful approach may be to build on the back-to-sleep message with additional advice to parents regarding risks such as plush toys and soft bedding. Parents should be informed about the dangers of falling asleep with their infants or sharing a sleep space and encouraged to provide their infants their own sleep spaces (crib or bassinette) to minimize risks of smothering.

Overall, health care providers and parents alike may better protect infants from SUIDs if they remember that unsafe sleep is a preventable cause of death.  Keeping infants safe while sleeping provides a daily opportunity to protect children in ways that are easy to understand and practice.

This report presents findings from a nationally representative household survey conducted exclusively by Knowledge Networks, Inc. (KN), for C.S. Mott Children’s Hospital via a method used in many published studies.  The survey was administered in May 2011 to a randomly selected, stratified group of parents  age 18 and older (n= 458) with a child age 0 months to age 3 years from the KN standing panel that closely resembles the U.S. population.  The sample was subsequently weighted to reflect population figures from the Census Bureau.  The survey completion rate was 54% among parent panel members contacted to participate.  The margin of error is ± 4 to 6 percentage points.