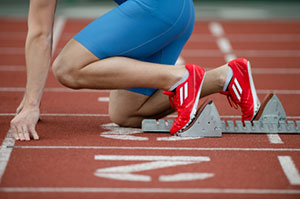 Several reports indicate that use of performance-enhancing (P-E) drugs by athletes in high school is increasingly common. Less well understood is what parents think schools should do to address PE drug use—particularly what the consequences should be.

In August 2008, the CS Mott Children's Hospital National Poll on Children's Health asked parents of high school athletes about their awareness, attitudes and opinions related to P-E drug use.

Parent responses to this poll confirms that P-E drug use is an important issue in high school athletics:

Despite broad parental support for testing, there is only limited support for individual penalties for athletes who test positive. For example, roughly one-half of parents think that a positive test should result in the athlete being banned for the rest of the season and/or forfeiting an individual win or award. Only one-third of parents favor banning the athlete from all sports for a year, and only 19% would support forfeiting team wins or awards (Figure). 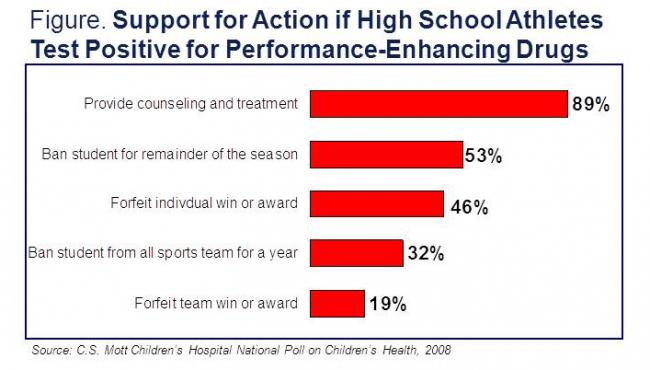 Performance-enhancing drugs are no longer just a concern for college and professional sports. In this poll, 1 in 10 parents of high school athletes report firsthand knowledge of P-E drug use in young people, and virtually all parents want the topic addressed by coaches. Parental concern translates to broad support for random testing of high school athletes for P-E drugs and for reporting aggregate test results to the state government. In contrast, far fewer parents support individual penalties for athletes who test positive, with only minimal support for team penalties. Schools and states that are considering options for P-E testing should expect differential levels of parental support for testing versus penalizing high school athletes.

This report presents findings from a nationally representative household survey conducted exclusively by Knowledge Networks, Inc, for C.S. Mott Children’s Hospital via a method used in many published studies. The survey was administered in August, 2008 to a randomly selected, stratified group of adults aged 18 and older (n=2,245) with and without children from the Knowledge Networks standing panel that closely resembles the U.S. population. For this analysis, a subset of parents with high school athletes was used (n=332). The sample was subsequently weighted to reflect population figures from the Census Bureau. The survey completion rate was 62% among panel members contacted to participate. The margin of sampling error is plus or minus 2 to 8 percentage points, depending on the question.