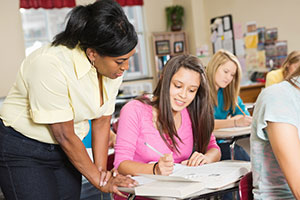 Every hour in the United States, about 40 children are born to mothers 15 to 19 years old. Teen birth rates in the U.S. have generally improved over the past 2 decades, but they remain substantially higher than in other industrialized countries.

Americans consistently rate teen pregnancy as one of the top 10 biggest health problems for young people in their communities (August, 2010). Such concern echoes medical facts: teen births are risky for the health of the mothers and for their children. In particular, babies of teen moms are more likely to be born premature and at low birthweight than babies born to women in their 20s and 30s. Low-birthweight babies are more likely to have learning disabilities and health problems than other infants. Teens moms are also more likely to have health problems, to drop out of high school, and to need welfare support.

In 2010, the U.S. government expanded funding to support new, innovative approaches to prevent teen pregnancy. The C.S. Mott Children’s Hospital National Poll on Children’s Health asked adults across the country about their opinions on teen pregnancy and support for new and existing programs.

Overall, three-quarters of U.S. adults say they are concerned about the problem of teen pregnancy. Nearly one-third (32%) of adults are “very concerned” about teen pregnancy.

Ratings of “very concerned” are higher among adults in states with higher-than-average teen birth rates, among women versus men, and among African Americans and Hispanics versus whites.

In the context of federal initiatives to encourage innovations to address the teen birth rate, the C.S. Mott Children’s Hospital National Poll on Children’s Health asked about public support for current and potential future programs to prevent and discourage teen pregnancy.

Two-thirds of adults indicate strong support for continuing to teach teens about abstinence and birth control, as shown in Table 1.

Half of adults strongly support requiring health plans to cover birth control. Similar proportions favor a program that would require paternity testing for pregnancies that rely on public funds to cover medical expenses for teen mothers and their children (Table 1). Support for paternity testing is similar by gender and across race/ethnicity groups.

The public expresses limited support for policies that would not provide welfare assistance for teen moms (i.e., would be punitive in their intent). The public is also less enthusiastic about programs that would make emergency contraception available without a prescription.

The majority of adults also show strong support for programs to prevent further pregnancies among teen moms who already have a child: 62% strongly support ‘teen and tot’ programs in local schools, to encourage teenage moms to finish their high school education and delay further childbearing.

Nearly half (47%) of adults strongly support providing medical care coverage for teen mothers, in order to give advice about birth control and coverage for contraceptive medications.

Only 27% of adults showed strong support for a program that would provide medical coverage for children but not for the mothers during future pregnancies. 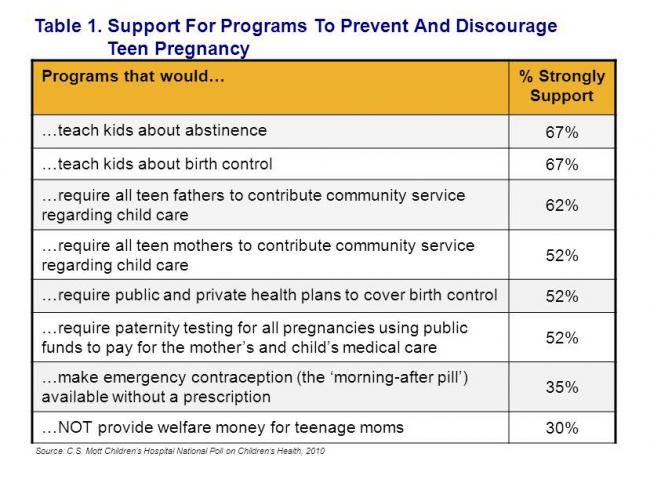 The teen birth rate is higher in the U.S. than in other industrialized countries, and the American public remains quite concerned about the problem of teen pregnancy. Results of this poll indicate that most adults strongly support established pregnancy prevention efforts, such as teaching abstinence and birth control to teens. Much of the public also indicates strong support for innovative programs that would try new strategies to prevent teen pregnancy.
These results suggest that US adults are ready to move beyond traditional approaches, to embrace more innovative programs to deter pregnancy and improve teen parenting. For example, community service requirements would not only allow teens to realize the demands of caring for young children, but may provide opportunities to learn about key aspects of child development, enabling teens to be more effective and confident parents.

Results of this poll also demonstrate strong public support for an emerging theme in policies directed toward teen pregnancy—expecting greater responsibility on the part of fathers. The message from the public is clear: teen fathers should be engaged in ways that make them think about the consequences of teen pregnancy and prepare them to be capable and confident parents.

Importantly, adults in the U.S. express limited support for programs that would be punitive to teen parents and their children, such as withholding welfare support from teen mothers. In contrast, the public endorses programs to prevent subsequent teen pregnancies, by offering educational and medical support to teen mothers.

A final note: in states with higher teen birth rates, the public indicates greater concern about teen pregnancy. Teen pregnancy is a very visible community issue, and the public continues to view it as a major child health concern —whether for teen parents or for their children.

This report presents findings from a nationally representative household survey conducted exclusively by Knowledge Networks, Inc, for C.S. Mott Children’s Hospital via a method used in many published studies. The survey was administered on August 13 - September 7, 2010 to a randomly selected, stratified group of adults aged 18 and older (n=2,184) from the Knowledge Networks standing panel that closely resembles the U.S. population. The sample was subsequently weighted to reflect population figures from the Census Bureau. The survey completion rate was 61% among parent panel members contacted to participate. The margin of sampling error is plus or minus 3 percentage points. 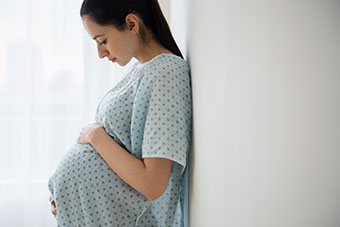 What to expect around supporting pregnant teens