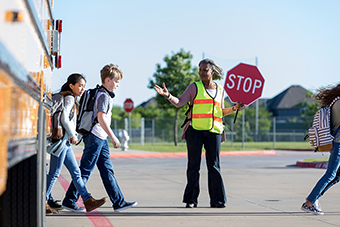 The start and end of the school day can be a snarl of cars and buses which can pose safety risks to children traveling to and from the school building. The C.S. Mott Children’s Hospital National Poll on Children’s Health asked a national sample of parents of children 6-12 about safety concerns related to car and bus traffic around their child’s school.

Nearly one-third of parents (31%) worry about their child’s safety going to and from school, and 28% think it is likely that a child will get hurt near the car or bus drop-off area. Parents report several major problems that pose a risk to children’s safety before or after school, including drivers not paying attention (37%) or speeding (34%). Other major problems include parents parking in no-parking areas (26%) or dropping off in the wrong location (26%). In addition, parents say children not staying on the sidewalk (29%) and bus drivers not paying attention (24%) are major problems before and after school. 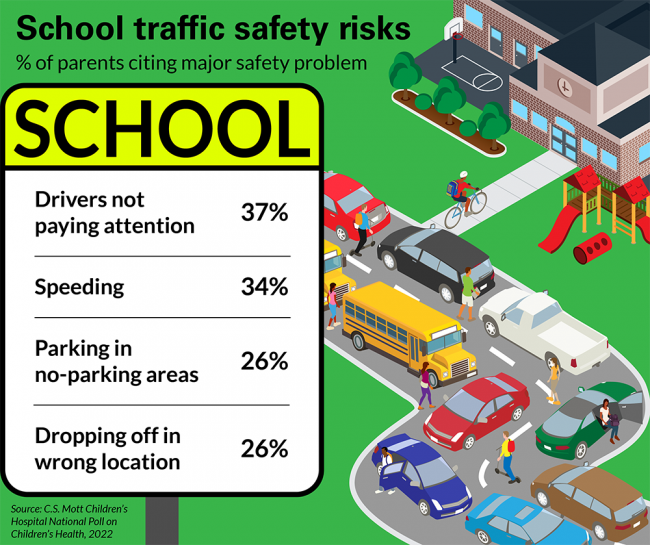 Many parents look forward to kids going back to school, but dread returning to the daily hassle of getting them to and from school. And parents may be sending mixed messages to their kids: preaching the need to be safe but failing to follow the school traffic rules themselves.

Most schools have a plan to manage traffic with specific lanes for parents and buses to drop off and pick up. Usually, these lanes minimize the extent to which children would have to walk in front of or between cars. Problems occur when parents park in a lane that is supposed to keep moving, disrupting the traffic flow; in response, other parents drop off or pick up their child in the middle of the road or other non-authorized locations, forcing their child to dodge between other cars. The danger is exacerbated when parents are on their phone, in a hurry, or otherwise distracted.

This Mott Poll report reflects the views of parents of children 6-12 years. These elementary school-age children may be particularly vulnerable to traffic-related injuries because they are less skilled at judging when it is safe to cross the street. Therefore, the responsibility for keeping kids safe lies primarily with the adults in the school community – parents, bus drivers, school officials, and law enforcement.

It is clear from this poll that parents want school officials to be more proactive in addressing school traffic problems. Most parents support efforts to clearly mark and direct the traffic flow using cones, gates or other barriers. They want school officials outside at the beginning and end of the school day, making sure parents and bus drivers are following the safety rules. Some schools have law enforcement officers onsite to enforce speed limits and other traffic regulations.

As a last resort, school officials may decide to suspend or ban parents who repeatedly violate safety procedures from driving onto school grounds. This should be done carefully to ensure that parents don’t choose another option that would be even more dangerous, such as dropping off their child on a busy road outside of school grounds. It may be helpful to use the school newsletter and “backpack mail” to remind parents about the importance of following traffic safety procedures, and the penalties parents may face if they violate them.

One way for schools to decrease the traffic congestion near the school is to encourage more students to walk, bike or ride a scooter to school. These activities provide daily exercise for children and can increase their self-confidence. However, this Mott Poll highlights that only 1 in 10 children walk or ride a bike/scooter to school.

Some parents do not allow their child to walk or ride a bike/scooter to school because of safety concerns. Schools can alleviate parent worry by implementing specific strategies: informing parents of safe routes to school that have crosswalks and bike lanes; and working with city officials or parent-teacher associations to place crossing guards at busy intersections.

Parents can take steps to prepare their child to travel safely to and from school. An important strategy is for parents to do a test run together with their child to agree on the safest route to school and identify potential hazards. When possible, parents can point out the homes of family friends or familiar neighbors where children can go for help. Parents should make sure children consistently look both ways for traffic before proceeding into an intersection, even if there is a crosswalk. Parents can introduce themselves and their child to the crossing guard. When schedules allow, parents might accompany their child on the way to or from school make sure they are following good safety habits, and to be a part of a broader community of parents who ensure that all children can travel safely.

This report presents findings from a nationally representative household survey conducted exclusively by Ipsos Public Affairs, LLC (Ipsos) for C.S. Mott Children’s Hospital. The survey was administered in April 2022 to a randomly selected, stratified group of adults who were parents of at least one child age 3-18 years living in their household (n=2,002). Adults were selected from Ipsos’s web-enabled KnowledgePanel® that closely resembles the U.S. population. The sample was subsequently weighted to reflect population figures from the Census Bureau. The survey completion rate was 59% among panel members contacted to participate. This report is based on responses from 923 parents with at least one child age 6-12. The margin of error for results presented in this report is ±1 to 4 percentage points.