Saturday is the Great American Smokeout, a yearly event from the American Cancer Society to encourage smokers to quit once and for all. While traditional cigarette smoking has seen a decline in recent years, e-cigarettes are becoming more popular than ever.

In a recent study published in JAMA, researchers from California found an association between vaping among teens and future cigarette smoking. Those who vaped were more likely to try cigarettes, and use them more heavily if they frequently used e-cigarettes.

These results echo concerns of parents throughout the years in the National Poll on Children’s Health. In 2015, both parents and teens showed high levels of concern, with 84% of parents and 81% of teens saying they believe allowing minors to use e-cigarettes will encourage the use of other tobacco products. Parents and teens also showed strong support for implementing various restrictions on the sale of e-cigarettes (Figure 1). Read the full report: Teens and parents agree: Place restrictions on e-cigarettes 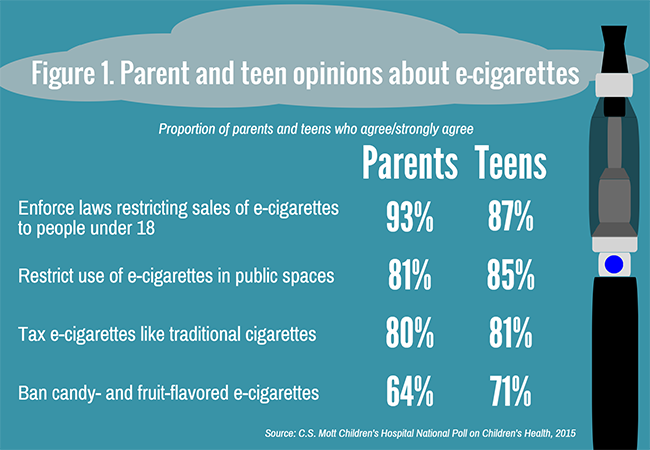 This year the FDA released updated e-cigarette restrictions, banning sales to minors and requiring manufacturers and retailers to place health warnings on product packages and advertisements. Additional concerns have yet to be addressed on a national level, such as banning candy- and fruit-flavored e-cigarettes out of concern that these flavors will appeal to teens.