Adults and kids less protected than anticipated against the flu 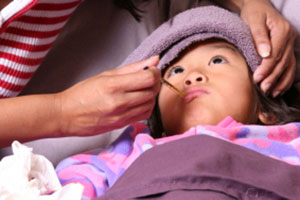 Adults and kids less protected than anticipated against the flu

In October 2007, the CS Mott Children’s Hospital National Poll on Children’s Health reported that 65% of parents of children 5 years old or younger planned to vaccinate their children against influenza during the 2007-08 flu season. Flu vaccination rates for high-risk adults were expected to be lower than those among children, with the exception of adults aged 65 or older.

Data from the Centers for Disease Control and Prevention indicate that the flu season in the United States quickly accelerated in December 2007 and January 2008. By the second week in January, 19 states reported sporadic activity, 26 states reported moderate activity, and 4 states reported widespread influenza activity.

The typical peak of influenza activity in the United States occurs in January or later, which means that flu vaccination rates in December may indicate how well protected the US population is against a major flu outbreak. In December 2007, the CS Mott Children’s Hospital National Poll on Children’s Health measured the proportion of children and adults who had already received flu vaccine, and those who still intended to get vaccinated against flu this season.

For households with children up to 5 years old (ie, the age group recommended for universal flu vaccination this season), the vaccination rate was 36%, and another 18% of households planned to vaccinate their children. Almost one-half of parents said that this season was the first time they had vaccinated their young child(ren) against influenza.

Flu vaccination and planned vaccination rates among young children and adults are shown in Figure 1. 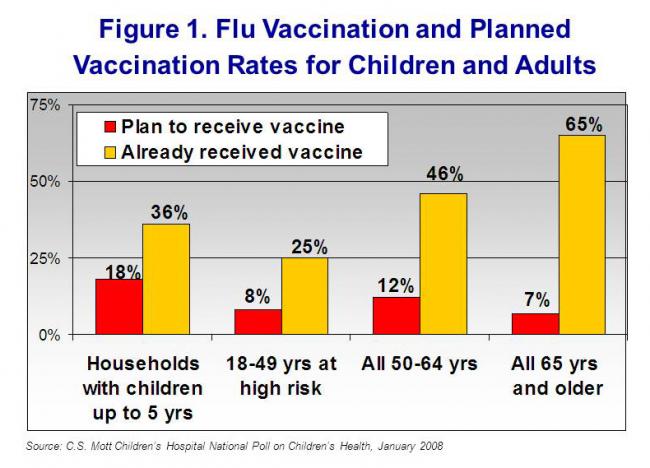 National efforts to prevent an influenza epidemic hinge on broad flu vaccination of the public in advance of flu activity. By December 2007, before widespread influenza began, flu vaccination rates among children were lower than expected. However, the high number of households vaccinating their young children against flu for the first time demonstrates broad acceptance of new national recommendations for flu vaccination.

Vaccine use to this point leaves about 40 million doses still available, based on pre-season CDC estimates of supply. Higher adult vaccination rates in states with greatest flu activity suggest that many adults decide to get vaccinated only when they perceive a risk of getting flu themselves. As flu activity increases nationwide, it is not too late for millions of unvaccinated high-risk individuals to get immunized.

This report presents findings from a nationally representative household survey conducted exclusively by Knowledge Networks, Inc, for C.S. Mott Children’s Hospital via a method used in many published studies. The survey was administered from Dec 6 - Jan 4 2008, to a randomly selected, stratified group of adults aged 18 and older (n=2,131) with and without children from the Knowledge Networks standing panel that closely resembles the U.S. population. The sample was subsequently weighted to reflect population figures from the Census Bureau. The survey completion rate was 64% among panel members contacted to participate.