Too convenient? Majority of adults support bans on powdered alcohol 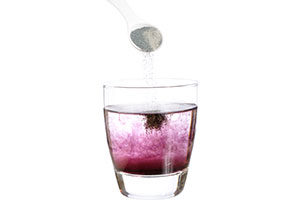 Too convenient? Majority of adults support bans on powdered alcohol

Powdered alcohol is a new product approved for sale in the United States in March 2015. A packet of powdered alcohol, when combined with 6 ounces of water, makes a single serving of an alcoholic drink.

In May 2015, we asked adults across the U.S. for their attitudes about potential laws regarding powdered alcohol. We provided arguments for and against powdered alcohol before asking questions.

About one-third (33%) of adults in the U.S. had heard of powdered alcohol by the time of this Poll. Adults expressed several concerns about how powdered alcohol might affect youth under 21 years of age:

The majority of adults support restrictions on the product, either as complete bans or related to online sales and advertising (Figure 1).

For each of these types of potential regulations, respondents who voiced concerns about potential impact on youth were more likely to favor a ban and/or restrictions on powdered alcohol. 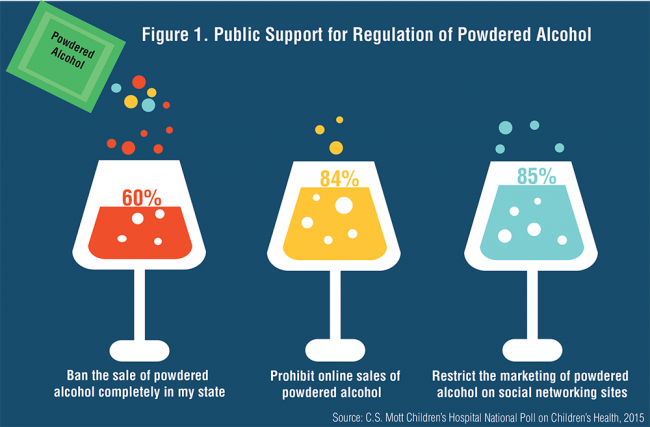 Although powdered alcohol is a new product, the public is very aware of liquid alcohol and its related health risks for the U.S. population and for youth in particular. Alcohol abuse is identified by adults in the U.S. as one of the 10 biggest health problems for children’s health. High levels of public concern about misuse of powdered alcohol by youth in this Poll echo high levels of concern among adults about alcohol abuse by youth overall.

Findings from this National Poll indicate that the majority of U.S. adults (3 out of 5 adults) favor bans on powdered alcohol, consistent with their concerns about powdered alcohol being misused by youth. Even higher proportions of adults favor restrictions regarding online sales and social networking advertisements. Based on these results, state laws that restrict or outright ban powdered alcohol will likely receive strong public support.

This report presents findings from a nationally representative household survey conducted exclusively by GfK Custom Research, LLC (GfK), for C.S. Mott Children’s Hospital via a method used in many published studies.  The survey was administered in May 2015 to a randomly selected, stratified group of adults age 18 (n =1,982) and older from GfK’s web-enabled KnowledgePanel® that closely resembles the U.S. population. The sample was subsequently weighted to reflect population figures from the Census Bureau. The survey completion rate was 60% among panel members contacted to participate. The margin of error is ± 2 to 4 percentage points.