In recent years ‘sexting’ – sending sexually explicit, nude or semi-nude photos by cell phone – has become a national concern, especially when it involves children and teens. Recognizing the heightened public concern, 17 states have already enacted laws that address youth sexting, and another 13 states have pending legislation in 2012.

Despite this legislative activity, little is known about what the public thinks are appropriate consequences for sexting. In January 2012, the C.S. Mott Children’s Hospital National Poll on Children’s Health asked parents about their teens’ cell phone use and asked adults in general about teen sexting and legislation related to sexting involving minors.

Cell Phone Use and Sexting

Cell phone use is popular among US teens: 79% of parents report that their teens age 13-17 have their own cell phones; 83% of these teens can receive photos on their phones.

Nearly one-half (44%) of adults nationwide believe that sexting is a very serious issue among teens.

Support for Laws Regarding Sexting

Adults express broad support for several types of laws regarding consequences of sexting by teens (Figure 1).  The vast majority of adults (81%) think teens who sext should attend an education program or counseling, while 76% favor requiring schools to give all students and parents information about sexting, and 75% support having teens who sext perform community service.

Most adults do not favor legal consequences for sexting among minors.  Only 44% of adults support fines (less than $500) for youth sexting, while 20% or less believe that sexting should be treated a sex crime or that teen sext offenders should be prosecuted under sexual abuse laws. 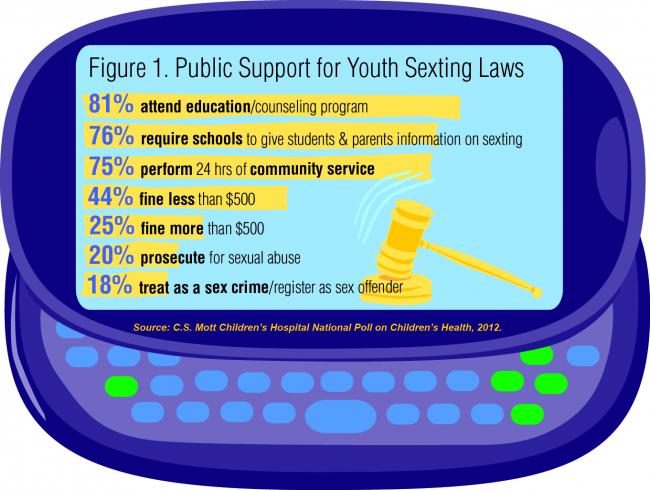 As a health concern for teens, sexting is an issue that has become prominent quickly. The sheer magnitude of concern at the national level (in this poll and as noted in previous Reports from the National Poll on Children’s Health) and the high degree of legislative activity at the state level indicate just how seriously the public is responding to the threat that sexting presents to children’s well-being. The chief concerns about youth sexting include the creation of child pornographic images that can be widely distributed, and the possibility that youth may be harmed psychologically through the distribution of photos to other people or groups who may use them for bullying or other victimizing purposes.

This Poll is unique in measuring public support for state laws regarding youth sexting.  There is broad public endorsement for laws that focus on education and counseling – as well as community service requirements – for youth sext offenders.  However, public support is very limited for penalties through the legal system, such as fines or criminal prosecution.  It appears that the public distinguishes youth sexting from child pornography or other criminal sexual behaviors.

The public also broadly supports the idea of requiring schools to distribute information about sexting to students and parents. While parents certainly see themselves at the center of addressing sexting among their teens, coordinated help from schools would likely be welcome.  There is also a likely role for child advocacy organizations to assist in this effort by developing clear educational information appropriate for students of different ages.

This report presents findings from a nationally representative household survey conducted exclusively by Knowledge Networks, Inc. (KN), for C.S. Mott Children’s Hospital via a method used in many published studies.  The survey was administered in January 2012 to a randomly selected, stratified group of adults age 18 and older (n=2,131) from the KN standing panel that closely resembles the U.S. population.  The sample was subsequently weighted to reflect population figures from the Census Bureau.  The survey completion rate was 60% among panel members contacted to participate.  The margin of error is ± 2 to 4 percentage points.