Ask the doctor: Is my child's medicine FDA-approved?

Ask the doctor: Is my child's medicine FDA-approved?

As more children take prescription medicines for an increasing number of chronic medical conditions, such as asthma and attention deficit hyperactivity disorder (ADHD), the issues of safety and effectiveness in children’s medicines are becoming even more important. Yet, it is not clear what parents think about the issue of FDA approval of medicines for children.

When parents were initially asked their opinion on FDA-approved medicines for children:

Parents were then given information about the proportion of medicines approved by the FDA for adults and children:

After receiving this information, parents were asked again their opinion on FDA-approved medicines for children, and:

Women are more likely than men to want their child’s doctor to prescribe medicines only if they are approved by the FDA for use in children.

Overall, 94% of parents agree that it is the doctor’s responsibility to tell them if their child’s medicine does not have pediatric labeling from the FDA. Parents whose children have no insurance were less likely to agree with this statement compared with parents whose children have private or public insurance (Figure 3).
Attitudes about doctor’s responsibility were not different for families of different levels of income or education. 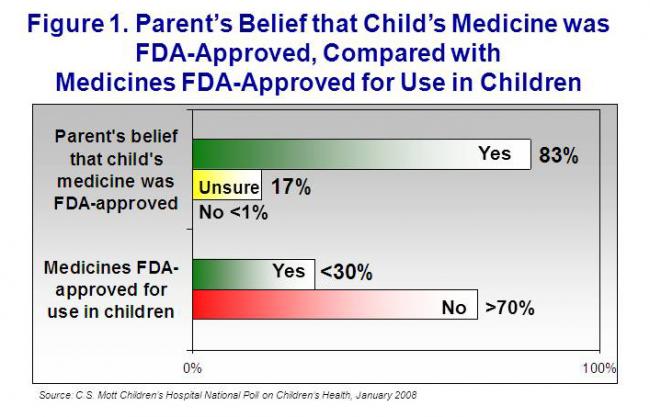 Less than one-third of prescription medicines available for children have formal FDA approval for use in children. Despite this fact, most parents believe that
the last medicine prescribed for their children had pediatric labeling, and about 3 out of every 4 parents want their children's doctors to prescribe only medicines
that have pediatric labeling. The majority of parents also believe their child’s doctor has the responsibility to inform them if prescribed medicine is not FDA-approved for use in children. These findings indicate how important FDA labeling is for parents.

Doctors may face several challenges as they respond to parents’ expectations for communication about FDA approval. Most importantly, doctors and parents must consider whether there are FDA-approved alternatives to the medicines without pediatric labeling. Information about pediatric labeling is not always easy to access, and there is very limited information in the public domain. This lack of information is not acceptable, given parents’ emphasis on FDA approval.

Second, some commonly used medicines (for example, specific antibiotics and types of steroids) do not have pediatric labeling for all ages or conditions, but are widely used to treat children on the basis of doctors' and patients' experiences. Doctors must be prepared to discuss the reasons behind their choices for medicines that do not have pediatric labeling. Finally, parents' high level of interest about this issue lends support to current efforts to expand research involving children. Fundamentally, FDA approval for a greater number of medicines will require more participation by children in medical research. Parents’ attitudes about research involving children will be the subject of the May 2008 C.S. Mott Children’s Hospital National Poll on Children’s Health Report. 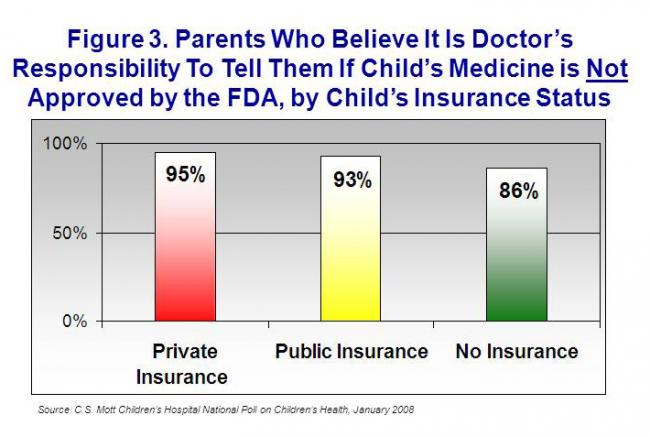