Emergencies at preschool & child care: Do parents know the plan? 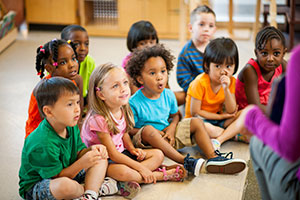 Emergencies at preschool & child care: Do parents know the plan?

Young children can be especially vulnerable during unexpected events such as severe weather, chemical spills, or violent community situations that may require evacuation of a preschool or child care center. Careful planning, preparation and communication for emergencies are essential for parents, preschool teachers, and child care providers.

In May 2015, the C.S. Mott Children’s Hospital National Poll on Children’s Health asked parents with children 0-5 years old in preschool or in a child care center for their opinions on how prepared their children’s centers and schools are in handling emergency situations and evacuations.

Parents reported that the following emergencies have affected their children’s preschool or child care center over the past two years:

Overall, 39% of parents reported their child’s center has experienced a severe weather event or an emergency situation over the past two years.

About two-thirds (65%) of parents reported that their child’s preschool or child care center has emergency contact information and health information stored digitally. In contrast, only 37% of parents said that their children’s centers or preschools have an emergency plan available online and 39% indicated a method of identifying children if an evacuation became necessary (Figure 1).

Being Prepared for Evacuations 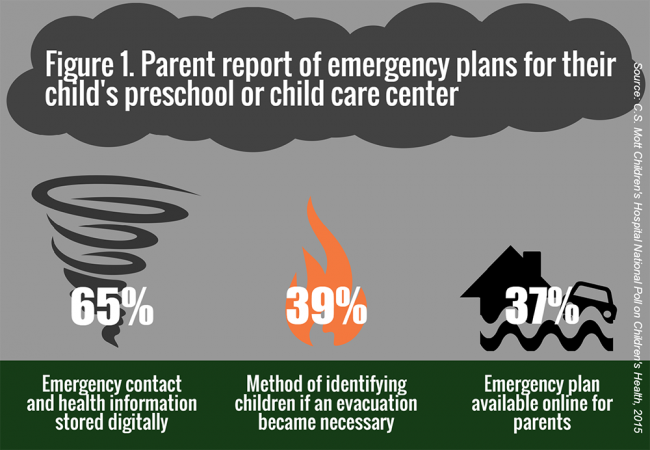 Many families have young children in child care centers and preschools, and these facilities must respond in emergency situations caused by weather events or man-made incidents. The American Academy of Pediatrics (AAP) has outlined specific policies for child care centers and preschools for emergency preparedness, and has focused on the need for accessible, written evacuation plans for specific disasters and emergency events. The AAP’s checklist for child care facilities recommends that parents check to see if there are specific plans for responding to disasters. Many child care programs are not part of local school systems and therefore may not conduct regular training for emergency situations, including those that require evacuation.

Parents’ lack of relevant information about emergency procedures was also apparent in specific areas of knowledge about plans in case of evacuation. While preparing for an emergency may not be required for preschools and child care settings, the frequency of major weather events and local man-made emergencies in recent years indicates how valuable such preparation can be. Moreover, the results of this Poll indicate the importance of parents’ knowledge about the plans—because if parents are not aware of plans for emergency, it is almost as if there were no plans at all.

This report presents findings from a nationally representative household survey conducted exclusively by GfK Custom Research, LLC (GfK), for C.S. Mott Children’s Hospital via a method used in many published studies.  The survey was administered in May 2015 to a randomly selected, stratified group of parents age 18 and older with at least one child age 0-5 (n=264) attending a child care center or preschool. Parents were selected from GfK’s web-enabled KnowledgePanel® that closely resembles the U.S. population. The sample was subsequently weighted to reflect population figures from the Census Bureau. The survey completion rate was 55% among panel members contacted to participate. The margin of error is ± 5 to 8 percentage points.