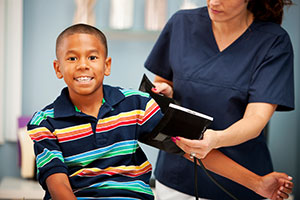 As part of the movement toward consumer-driven health care, retail clinics (also called in-store or convenient care clinics) have developed across the country. Retail clinics advertise treatment for common acute health problems, screening tests and vaccinations that is more convenient, quicker, and less expensive than care in traditional doctor’s offices and emergency rooms. The average cost for a retail clinic visit ranges from $40-$70.

Retail clinics are small walk-in health care offices located in department stores or pharmacies, typically staffed by nurse practitioners or physician assistants. The first retail clinic opened in 2000. Today, more than twenty companies operate about 300 retail clinics in the U.S., with an estimated 2000 or more expected to open by the end of 2008.

A common criticism of consumer-driven health care is that it places families at greater financial risk than in more common health plans. On the other hand, proponents of retail clinics in particular argue that uninsured children and families can access health care for routine, uncomplicated problems at a lower cost than if they sought care at a standard physician’s office or emergency room. Retail clinics have reported that they are serving high proportions of uninsured patients, and have also announced that many clinics now accept insurance payment. However, these issues have not been examined regarding children.

The C.S. Mott Children’s Hospital National Poll on Children’s Health asked households how they had paid for care they had sought at retail clinics. Parents are less likely to have paid out-of-pocket for a child’s visit than are adults who have sought care themselves (Table 1). More than half of parents reported that their child’s last visit to a retail clinic was covered in full by insurance.

In December 2006, the American Academy of Pediatrics issued a policy statement opposing the use of retail clinics as an appropriate source of medical care for infants, children and adolescents, chiefly because retail clinics do not provide a “medical home” for their patients. 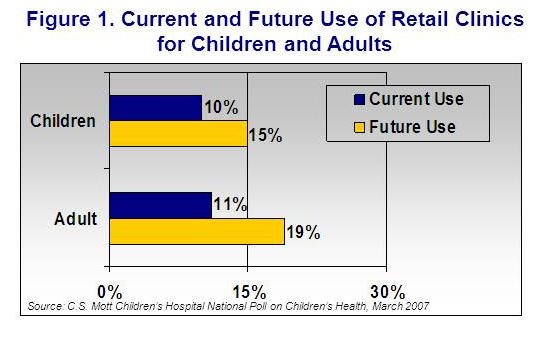 Given the relatively small number of retail clinics nationwide in 2007, a remarkably high proportion of children and adults have used retail clinics for their health care. This trend, and the fact that prior users are so satisfied with the care they have received, suggest that the demand for retail clinic care for children will rise steadily.

As use increases, especially for children with a usual source of care elsewhere, patients and physicians will face challenges regarding how to coordinate health care across retail clinics and more traditional care settings, in ways that promote access to timely care and safeguard children’s health. 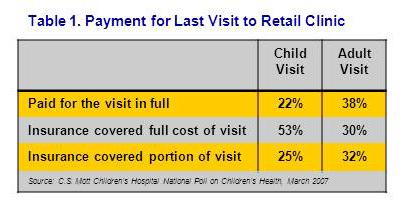 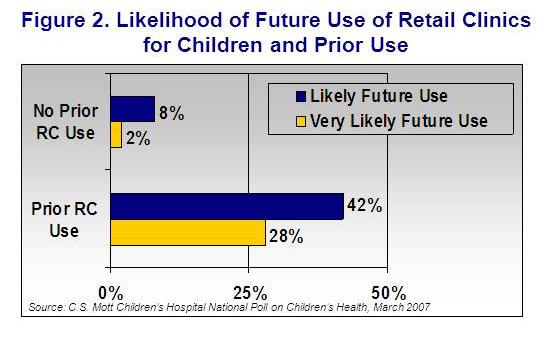 This report represents findings from a nationally representative household survey conducted exclusively by Knowledge Networks, Inc, for C.S. Mott Children’s Hospital. The survey was administered from March 14-26, 2007, to a randomly selected, stratified group of adults aged 18 and older with and without children on the Knowledge Networks standing panel that closely resembles the U.S. population. The sample of 2076 people was subsequently weighted to reflect the U.S. population figures from the U.S. Census Bureau. The response rate was 73% among Knowledge Networks panel members contacted to participate.