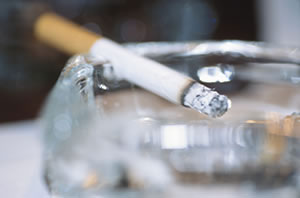 National rates of smoking and drug abuse among teens have declined substantially over the past decade. However, smoking and drug abuse by teens are the top 2 biggest child health concerns rated by U.S. adults in the latest C.S. Mott Children’s Hospital National Poll on Children’s Health. Obesity among children is now the 3rd-ranked health problem nationwide, reflecting the high level of public concern about the recent rapid escalation of the obesity epidemic.

Of note, ratings for the top 10 list did not differ between adults who have children in their households and those who do not. Overall, higher proportions of blacks and Hispanic adults rated all 17 concerns as “big problems” compared with white adults.

As shown in Figure 2, the rank order of the top 3 health problems for children differed by the race/ethnicity of the person surveyed. While the list was similar for Hispanics and other race/ethnicity groups to the overall rankings, among whites alcohol abuse nudged above childhood obesity as the third biggest concern.

Blacks rate teen pregnancy as the number one health problem for youth and two times more of concern than whites, with 51% reporting teen pregnancy as a big problem compared with only 25% of whites. These differences mirror national rates of teen pregnancy, which have declined nationally over the past decade but are more than twice as high for black youth as for white youth.

The National Poll on Children’s Health also found that Hispanics were more likely to express concern about obesity, with 42% seeing it as a big problem compared with only 31% of whites and 36% of blacks and other race/ethnicity groups (Figure 3). Childhood obesity was rated as the 3rd “biggest problem” among Hispanics and other race/ethnicity groups, 4th among whites, and 7th among blacks as a big problem for children. Higher levels of concern among Hispanics and blacks versus whites may reflect overall higher prevalence of obesity among Hispanic and black youth. However, the lower relative ranking of obesity as a problem among blacks may indicate more reluctance to address obesity than other health concerns that they rated more highly.

Internet safety is a relatively new health concern in relation to other health issues and received a poll ranking of 7th overall in the top 10 big health problems for children. Women were more likely to rate it as a big problem; 32% report Internet safety as a big problem compared with only 21% of men. Internet safety had no differences in proportion of concern by education status, income level or marital status. 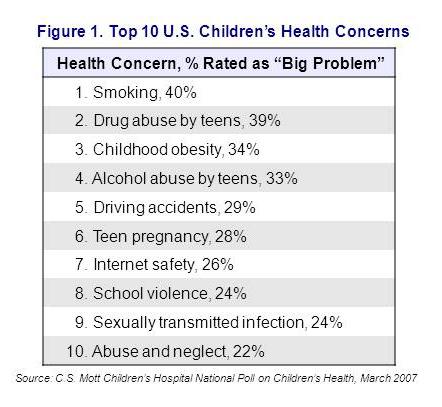 Tobacco use, alcohol abuse and drug abuse, and safety on the roads have been major national child health concerns for many years. The results of this National Poll on Children’s Health are remarkable because childhood obesity now rates among the top 3 concerns about children’s health.

Nevertheless, levels of concern about major child health problems vary between women and men, across race/ethnicity and by education and income. Such differences likely reflect varying levels of the health problems themselves among members of different communities (for example, teen pregnancy rates higher among black than white youth), in combination with higher levels of relative concern among some adults than others (for example, higher ranking of Internet safety as a concern among women than among men).

Therefore, it is important for public health officials and policy makers to be aware that different communities may have particular patterns of concern that can influence their readiness to support new public health policy initiatives for children. The National Poll on Children’s Health plans routine re-assessments of public levels of concern about these and other child health issues in the future, which will allow the public, researchers, and policy makers to watch how perceptions of threats to children’s health and well-being are changing over time. 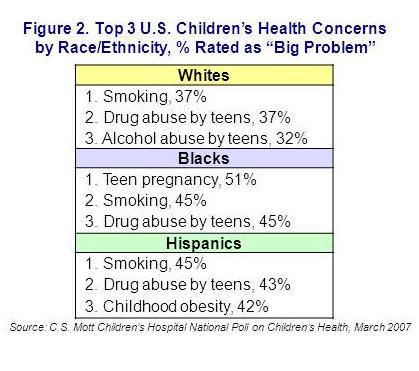 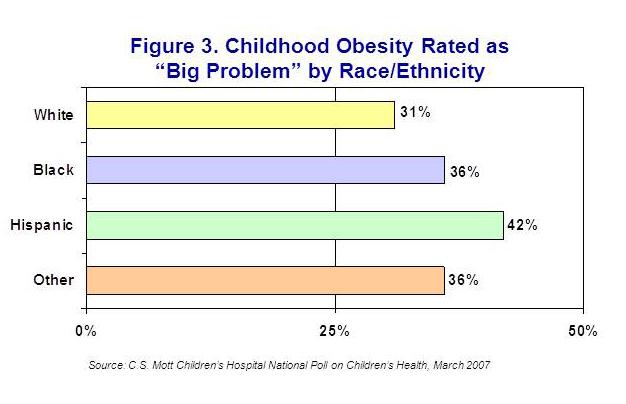 This report represents findings from a nationally representative household survey conducted exclusively by Knowledge Networks, Inc, for C.S. Mott Children’s Hospital. The survey was administered from March 14-26, 2007, to a randomly selected, stratified group of adults aged 18 and older with and without children from the Knowledge Networks standing panel that closely resembles the U.S. population. The sample of 2076 people was subsequently weighted to reflect the U.S. population figures from the Census Bureau. The response rate was 73% among Knowledge Networks panel members contacted to participate.