Nighttime driving restrictions for teens: How late is too late?

Teen drivers are at the highest risk for crashes and crash-related fatalities, especially at night. To reduce crashes among teens, many states have enacted Graduated Driver Licensing laws.  These laws typically include nighttime driving restrictions; the timeframes for those restrictions vary from state to state.  For example, in some states newly licensed teens may not drive after 10 pm, while other states don’t begin restrictions until midnight.

A new CDC report suggests that the specific timeframe for restricted driving matters.  In data from 40 states over the time period 2009 to 2014, over 6,000 drivers 16 or 17 years old were involved in fatal crashes, roughly one third of which occurred at night.  Among these fatal night crashes, 57% happened before midnight.

In our January 2016 NPCH Report, we asked parents of teens 13-18 years old and teens themselves about limits placed on driving circumstances that can increase a teen driver’s risk of a crash. 61% of parents said they do not allow their teens to drive after 10:00 p.m. Teens said their parents have placed fewer limits on their driving than were reported by their parents. 73% of parents said they restrict their teens from texting while driving. 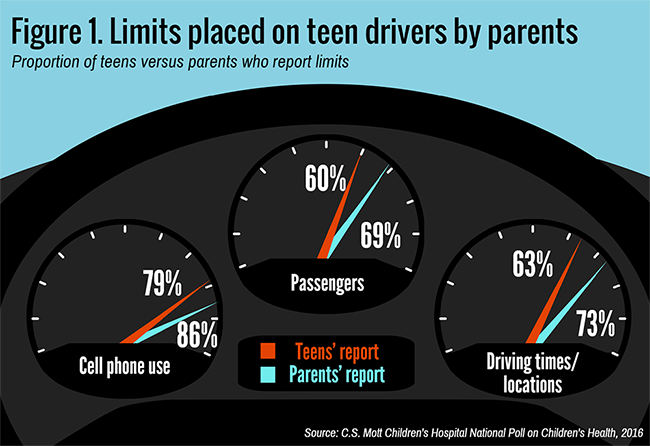 What do you think?
Does your state have laws restricting teen driving during night hours? Do you have family rules to limit teen driving after 10 pm?  Share your thoughts with us on Twitter @csmottpoll.