Adolescents go to the doctor for routine check-ups less frequently than any other childhood age group. Unfortunately, this decline comes at a time when many adolescents are experimenting with behaviors such as tobacco smoking, alcohol use, and sexual activity that may negatively affect their health for years to come.

Given the numerous issues children face during adolescence, it may not be possible for doctors to cover all the important topics in a visit every 1-2 years. Therefore it is important to make every minute count when adolescents come in. Doctors and nurse practitioners have some guidelines they can follow for appropriate topics to cover, but parent preferences for what should be addressed during these visits are rarely asked.

In a C.S. Mott Children’s Hospital National Poll on Children’s Health conducted in July-August 2007, parents of adolescents 11 to 17 years old were asked to indicate which of 18 health-related topics were “very important” for the doctor to discuss during routine checkups for adolescents. The 3 most commonly named topics were diet/nutrition, exercise/sports, and physical changes of puberty (physical development), followed by drug use, tobacco use, sexually transmitted diseases (STDs), depression/suicide and obesity — all of which were named by approximately one-half of all parents of adolescents in this survey (Figure 1).

Health topics that did not make the top ten list for all parents include: pregnancy prevention, relationships with family/friends, safety, sexual abstinence, school performance, violence, bullying and religion/faith. However, differences in top topics to discuss were seen by race/ethnicity.

Differences in Topic Importance by Race/Ethnicity

Differences in Topics by Gender and Age

In the eyes of parents, there were several topics that had differing levels of importance based on the child’s gender. Parents of adolescent boys more frequently rated drinking and tobacco use as very important topics to discuss than parents of adolescent girls. In contrast, parents of girls more commonly cited sexual abstinence and eating disorders as very important topics for discussion (Figure 4). 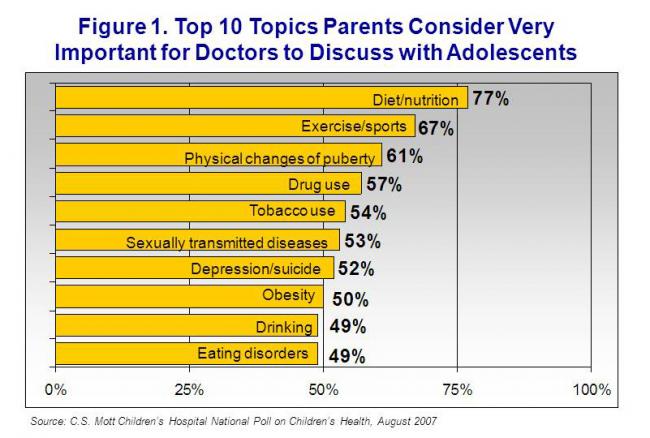 Providing effective health care to the over 35 million adolescents in the United States involves a great deal of discussion about health behaviors that can affect individuals’ lives well into adulthood. Understanding which health topics parents value most during these visits, and recognizing how their priorities may differ based on the gender or age of their child, is an important component of providing the best care possible to this group of children.

What may surprise some clinicians and public health professionals is how many parents do not believe that topics such as drug use, drinking, smoking, and sexually transmitted diseases are very important for doctors to talk about with adolescents. These are issues that can affect individuals’ health for a lifetime, and other research has indicated that counseling from physicians can play an important role in discouraging adolescents from starting and continuing risky behaviors. Some parents may believe that these topics are best discussed within the family, or in other settings such as youth groups and faith communities. The ultimate goal is that each adolescent hears healthy advice on key topics of importance to him or her.

On the other hand, there is enough variation in parents’ beliefs about “very important” topics by race/ethnic background, children’s gender and age that it makes most sense to encourage parents and adolescents to identify their own important topics to their health care providers. Based on findings from this poll, parents of adolescents can feel confident that there are tens of millions of other parents who want health care providers to discuss many topics — even very sensitive topics such as depression/suicide and sexuality — with their adolescent children. 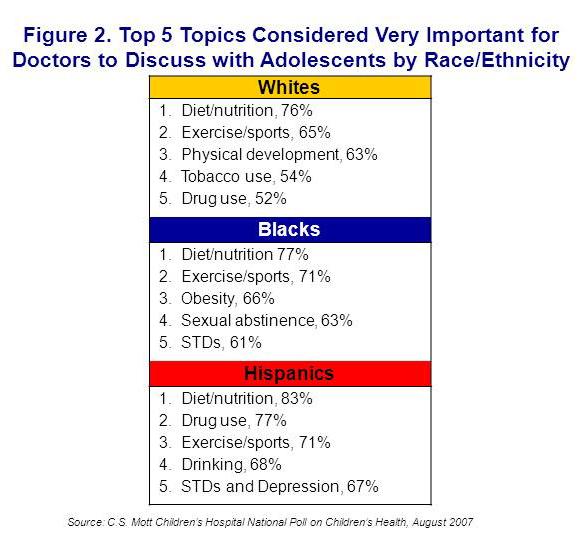 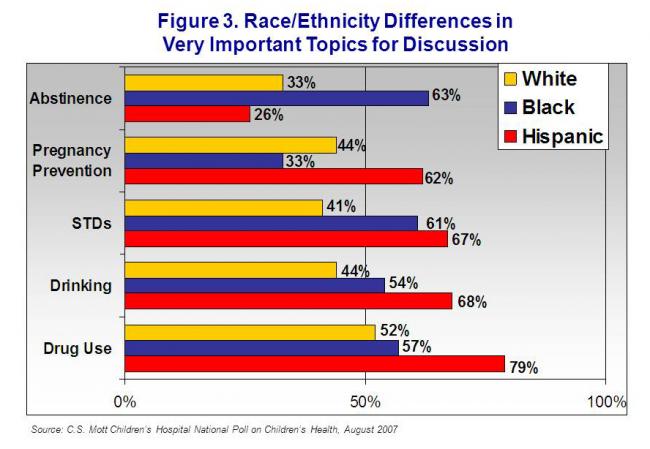 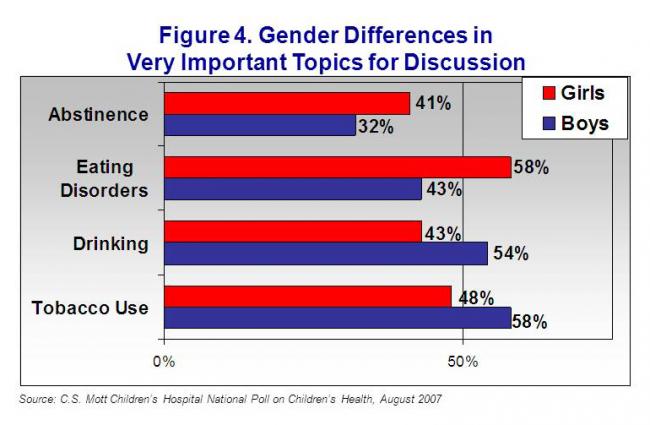 This report presents findings from a nationally representative household survey conducted exclusively by Knowledge Networks, Inc, for C.S. Mott Children’s Hospital. This study was conducted using a method used in many published studies. The survey was administered from July 20- August 9, 2007, to a randomly selected, stratified group of adults aged 18 and older (n=2,060) with and without children from the Knowledge Networks standing panel that closely resembles the U.S. population. The sample was subsequently weighted to reflect U.S. population figures from the Census Bureau. The response rate was 71% among Knowledge Networks panel members contacted to participate.