Bullying and internet safety are top health concerns for parents 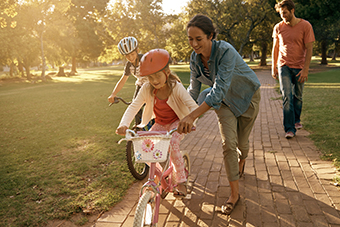 Bullying and internet safety are top health concerns for parents

Each year, the C.S. Mott Children’s Hospital National Poll on Children’s Health asks a national sample of adults to identify health topics that are a “big problem” for children and teens. The Top 10 health concerns for children for this year were:

Top Health Issues Parents Worry May Impact their Own Children

New for 2017, the Mott Poll asked poll respondents who are parents of children 0-18 years about their level of concern for whether child health topics might impact their own children. Overall, the highest proportions of parents were “very concerned” about bullying/cyberbullying, internet safety and stress. The next most common issues concerning parents were motor vehicle accidents and school violence.

Mott Poll results showed both similarities and differences in key health concerns for parents of children of different ages. Motor vehicle accidents, bullying/cyberbullying and internet safety were common across all groups, suggesting that parents considered ways in which these issues could impact their child today and in the future. In contrast, concerns about cancer were more common among parents of children age 0-5, while parents of teens were more concerned about depression.

Results also showed patterns by the racial/ethnic groups of parents. For black parents, racial inequity was the key issue most parents were very concerned about for their child. Many black parents were very concerned about other issues affecting the safety of their children in the broader community such as school violence and motor vehicle accidents. Both Hispanic and white parents more commonly identified bullying/cyberbullying and internet safety as very concerning issues. For Hispanic parents, stress was also identified as a common area of concern. 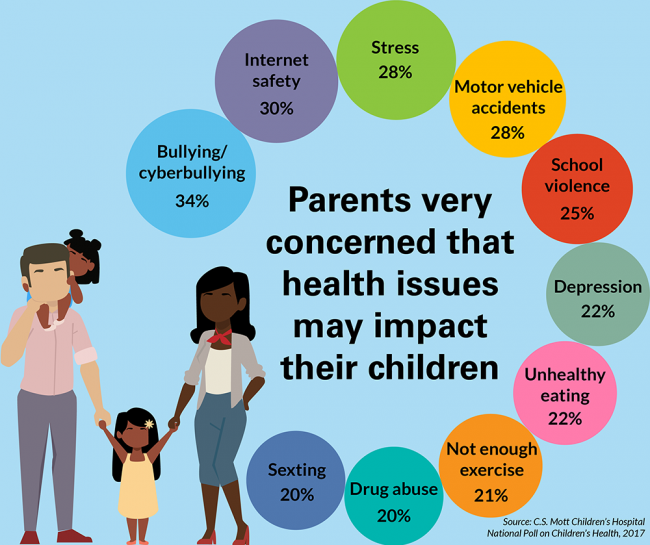 This year’s annual Top 10 Mott Poll shows that adults across the country once again recognize bullying, including cyberbullying, as the leading health problem for US children. Close behind are big health problems surrounding childhood obesity: inadequate exercise and unhealthy eating.

Unique to this year’s report is a focus on parent concerns about health issues that might impact their own children. As more children have access to the internet in general and social media in particular, it is clear that many parents are very concerned about the safety and well-being of their children in this arena. There have been many reports in the media about the impact of cyberbullying on the mental health of children. Anxiety, depression and even suicide have been linked to this abuse. In addition, predatory behavior by adults through the internet is a growing phenomenon. Parents should discuss with their children and teens the potential for these types of problems and ways to address or prevent them. Simple effective strategies include not providing personal identifying information on social media, chat platforms, or in shared gaming environments.

Motor vehicle accidents were of great concern to all groups of parents. Indeed, motor vehicle crashes are the leading cause of death for children age 2-14. In 2015, over 650 children died and more than 120,000 were injured in crashes. Yet, many of these could be prevented. Recent studies have shown that in one year more than 600,000 children age 0-12 rode in vehicles without the use of any type of restraint or seat belt. And, more than a third of children who die in crashes are not buckled up.  Although it can sometimes be confusing for parents to know what type of restraint is recommended for children at different ages, there are many resources for help. Parents can ask their child’s health care provider for advice or attend a community or Red Cross event where information on child safety seats is provided. There is also helpful information online from the Centers for Disease Control and Prevention (CDC) and the American Academy of Pediatrics.

This Mott Poll also identified important differences in child health concerns among racial/ethnic groups of parents. Black parents differed from Hispanic and white parents in the level of concern expressed regarding both racial inequities in health and in school violence. This finding likely reflects the impact of contemporary social issues on health priorities, and highlights that both experiences and perceptions can differ significantly among different groups of parents. Recent national and local efforts to identify and address racial disparities in health are beginning to focus on these concerns.

Sometimes parents may be very concerned about health issues that affect only small numbers of children but can be very serious if they occur. The finding that among parents of children age 0-5 cancer was rated as a top concern is one such example. Many parents fear their child will get cancer, yet fortunately pediatric cancer is quite uncommon and cure rates overall approach 90%. Part of the issue driving this concern is that parents may feel helpless with regard to things they can do to prevent their child from getting cancer since the causes of most cancers in children are unknown. Despite this, there are many things parents can do to prevent other, more common, illnesses and keep their children as safe as possible. These include making sure children stay up to date on their immunizations, eat healthy, get exercise, teaching online safety skills, use car seats/boosters/seatbelts and wear a helmet while riding a bicycle. 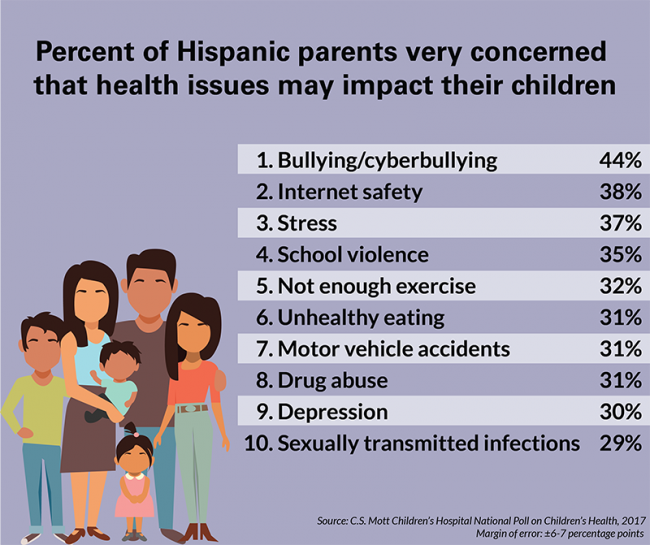 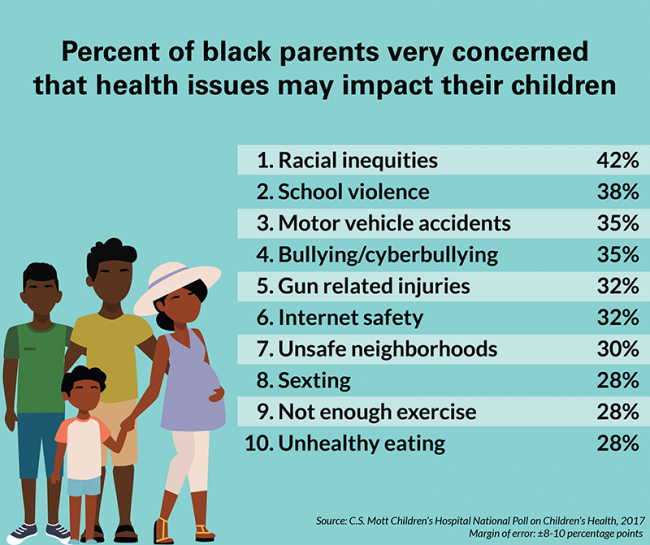 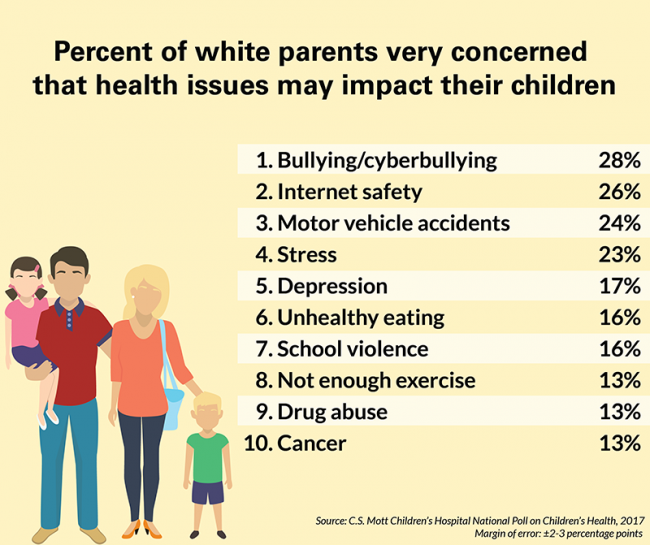 This report presents findings from a nationally representative household survey conducted exclusively by GfK Custom Research, LLC (GfK), for C.S. Mott Children’s Hospital. The survey was administered in May 2017 to a randomly selected, stratified group of adults age 18 and older (n=2,051), including parents of children age 0-18 years (n=1,505). Adults were selected from GfK’s web-enabled KnowledgePanel® that closely resembles the U.S. population. The sample was subsequently weighted to reflect population figures from the Census Bureau. The survey completion rate was 65% among panel members contacted to participate. The margin of error is ±2 to 4 percentage points and higher among subgroups.