In May 2009, the Poll asked adults to rate 23 different health concerns for children living in their communities. Table 1 presents the top 10 children’s health concerns rated as a “big problem” by adults in 2009.

Differences by race/ethnicity in adults’ ratings of the top 3 health problems for children are shown in Table 2.

The National Poll on Children’s Health found that adults from low-income households (<$30,000 per year) rated smoking & tobacco use as the top child health concern, while the middle and highest income households ($30,000 to
>$100,000) rated childhood obesity as the biggest health concern for children in their communities (Table 2).

For the first time since the Poll has measured national public attitudes about child health problems, stress is now in the list of top 10 biggest health problems for children. Children’s stress was rated a concern by more adults in the
lowest-income group (36%) than by adults in middle- and highest-income groups (17%-21%), and was rated similarly by adults from the major race/ethnic groups. 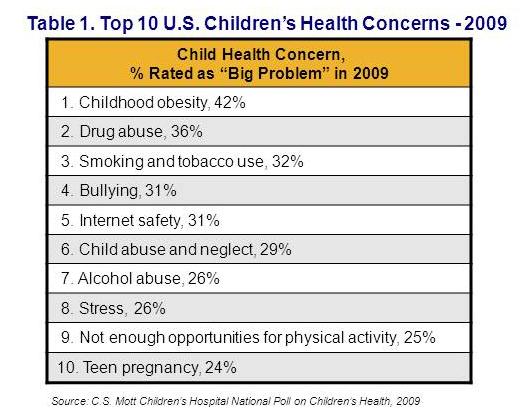 Our annual poll of public concern about health problems facing children reveals consistent patterns over the years but also new worries among adults about kids in their communities.

Childhood obesity again ranks as the #1 child health concern, with about 2 of every 5 adults rating it as a big health problem—a greater proportion than in 2008. The  difference this year is the uniformity of concern among adults of different racial/ethnic groups: Hispanics, blacks, and whites all rate childhood obesity as the #1 child health problem, whereas this was not the case in past years. The current level of agreement likely signals a rising level of concern about childhood obesity among adults across different communities, to the extent that it has now outpaced other concerns in past ratings such as teen pregnancy and drug abuse (blacks) and smoking, drug
abuse and bullying (Hispanics).

Stress now ranks among the top 10 child health problems, and was especially of concern for children in lower-income communities. As we reported in July 2009, levels of stress among children may relate to economic stresses faced by their families in the current economic downturn. More generally, the fact that stress rates so high in the list of child health problems is a reminder that most of the problems in the list are behavioral or psychological in nature. To address such problems successfully, children and families need not just access to medical and mental health care, but also guidance from community health and educational programs that cue healthy, protective behaviors and offer support when health problems arise. 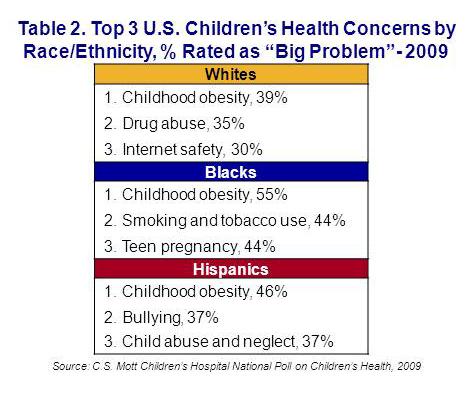 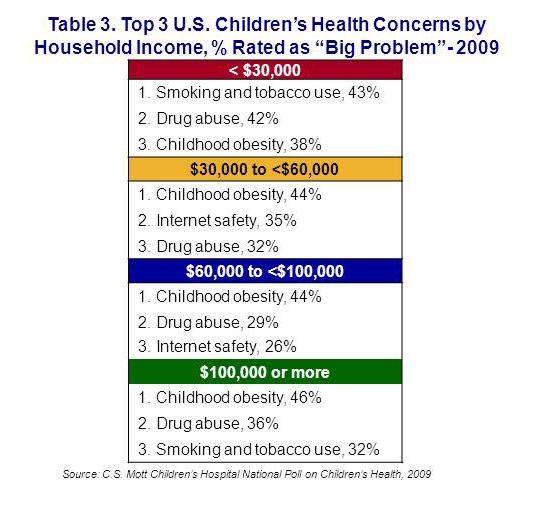 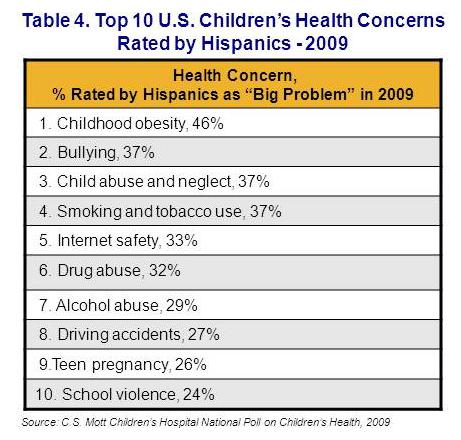 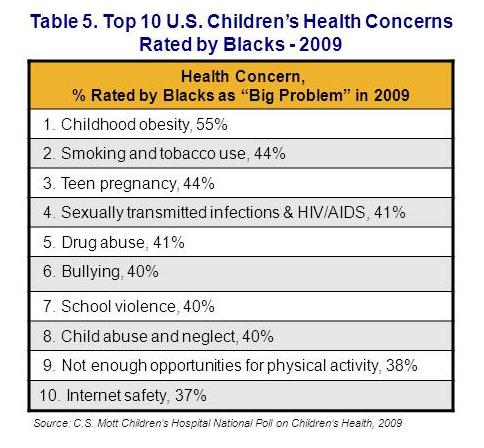 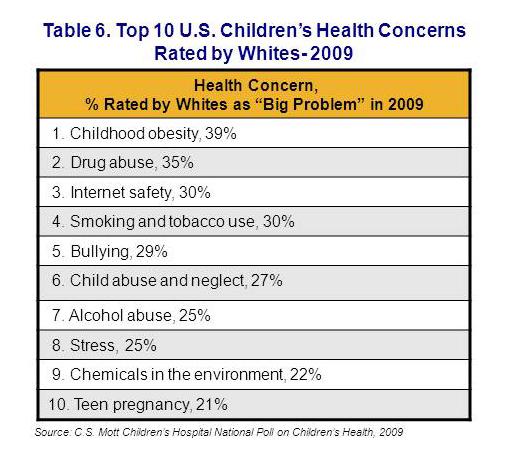 This report presents findings from a nationally representative household survey conducted exclusively by Knowledge Networks, Inc, for C.S. Mott Children’s Hospital via a method used in many published studies. The survey was administered in May 2009 to a randomly selected, stratified group of adults aged 18 and older (n=2,017) from the Knowledge Networks standing panel that closely resembles the U.S. population. The sample was subsequently weighted to reflect population figures from the Census Bureau. The survey completion rate was 59% among panel members contacted to participate. The margin of sampling error is plus or minus 3 to 4 percentage points for the main analysis. For results based on subgroups, the margin of error is higher.