In May 2011, the Poll asked adults to rate 23 different health concerns for the children in their communities. The top 10 children’s health concerns rated as a “big problem” are listed in Table 1.

Most of the top 10 health concerns pertain to widely recognized risky behaviors for teens and preteens:  drug, alcohol and tobacco use, as well as pregnancy.  However, the top health concerns this year also include risks associated with children’s use of technology, including internet safety and sexting.

This is the first time that drug abuse is at the top of the list of biggest health problems as measured in the Poll. Since 2007 childhood obesity, drug abuse and smoking have consistently been rated as the top three health problems for kids from the point of view of adults across the United States.

Ratings of children’s health problems differ based on whether adults currently have children in their homes: parents view drug abuse (30%), bullying (29%) and obesity (28%) as the top three problems, while other adults see obesity (36%), drug abuse (34%), smoking (24%) and teen pregnancy (24%) as the top problems.

Although drug abuse was rated as a big problem for children by more Hispanic and black adults than white adults, national data indicate that use of illicit drugs is indeed higher among blacks and Hispanics than whites in 8th grade, but is similar across race/ethnicity groups by 12th grade.

Obesity remains atop the list of child health concerns for the fourth straight year, with one-third of adults rating it as a big problem. However, the level of public concern has declined over the last few years.  This is consistent with data from the U.S. Centers for Disease Control and Prevention, showing that increases in children’s obesity rates over the last two decades have leveled off.

Internet safety is viewed as a big problem by nearly a quarter of U.S. adults. Aspects of internet safety range from online predators to “cyber-bullying” among peers.

For the first time in the Poll, sexting is in the top 10 health concerns for children, rated as a big problem by 20% of adults.  Sexting is a relatively new phenomenon that primarily affects adolescents, and adults are becoming increasingly aware of its potential dangers for youth, such as interpersonal conflicts with peers and the possibility of victimization by adults.

The top 10 child health concerns for Hispanic, black and white adults are shown in Table 3, revealing marked differences across racial/ethnic groups.  For almost all topics, black and Hispanic adults are more likely to rate the topic as a “big problem” compared with white adults.

Black adults are much more likely to cite violence-related issues as big problems.  In particular, the top 10 child health concerns for black adults include gun-related injuries (#4), school violence (#5) and unsafe neighborhoods (#6).   These same topics do not make white or Hispanic adults’ top 10 child health problems for children in their communities.

Each year, the National Poll on Children’s Health takes the public ‘pulse’ regarding child health issues, as a way to help set program priorities in medicine and public health and help officials see whether messages about specific health risks for children are reaching the public.

Results of this latest annual Poll on the biggest health problems for children suggest that adults continue to see childhood obesity as a major health problem for American kids today.  However, the level of concern about obesity in the public’s view has declined substantially from 2009 levels, consistent with the leveling off of obesity rates for U.S. children.  Nevertheless, the health effects of obesity, during childhood and into adulthood, are likely to remain substantial.

Public concern about drug abuse among children has increased, along with recent trends in use of drugs by U.S. adolescents. Whether this increased concern translates to greater support for drug prevention and/or drug treatment programs remains to be seen.

One of the most notable findings from this Poll involves the varied ratings by race/ethnicity.  Hispanic adults were more likely than black or white adults to have concerns about family-focused issues, including teen pregnancy and child abuse & neglect.  In contrast, black adults expressed deep concerns about the safety of the communities in which children live, in a way that Hispanic and white adults did not.  Gun-related injuries, school violence and unsafe neighborhoods were top 10 concerns for black adults, but none of the three made the top 10 for white or Hispanic adults.   These differences provide insight into the way child health differs across populations, and emphasizes the need for local programs to address community-specific priorities. 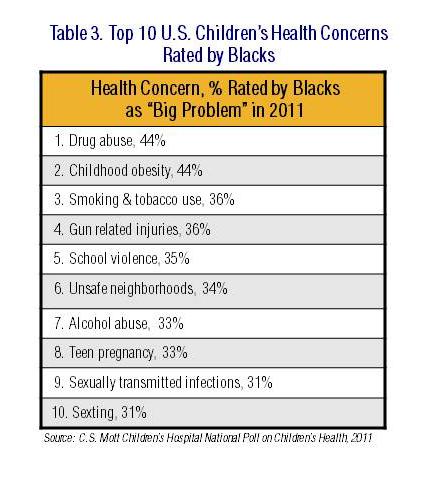 This report presents findings from a nationally representative household survey conducted exclusively by Knowledge Networks, Inc. (KN), for C.S. Mott Children’s Hospital via a method used in many published studies.  The survey was administered in May 2011 to a randomly selected, stratified group of parents age 18 and older (n= 2,130) from the KN standing panel that closely resembles the U.S. population.  The sample was subsequently weighted to reflect population figures from the Census Bureau.  The survey completion rate was 61% among panel members contacted to participate.  The margin of sampling error is ± 3 percentage points and higher among sub groups.