Game on: Teens and video games 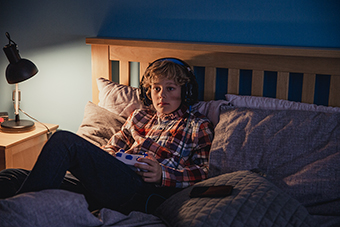 Game on: Teens and video games

Video games are a common form of entertainment for both teens and adults. The C.S. Mott Children’s Hospital National Poll on Children’s Health asked a national sample of parents of teens 13-18 years about the impact of gaming on their teens’ lives.

Parents report very different gaming patterns for teen boys than girls. Twice as many parents say their teen boy plays video games every day compared to parents of teen girls (41% vs. 20%). When they play video games, teen boys are more likely than girls to spend 3 or more hours gaming (37% vs 19%) and to play online against other gaming opponents (65% vs 31%).

Most parents agree or strongly agree (86%) that teens spend too much time playing video games. Parents try a variety of strategies to limit the amount of time their teen spends gaming including sometimes or frequently encouraging other activities (75%), setting time limits (54%), providing incentives to limit gaming (23%) and hiding gaming equipment (14%).

Overall, parents say gaming sometimes or frequently gets in the way of other aspects of their teen’s life such as family activities/interactions (46%), sleep (44%), homework (34%), friendship with non-gaming peers (33%) and extracurricular activities (31%). Parents whose teen plays every day are more likely to report that gaming has a negative effect on their teen’s mood compared to those who play less frequently (42% vs. 23%). 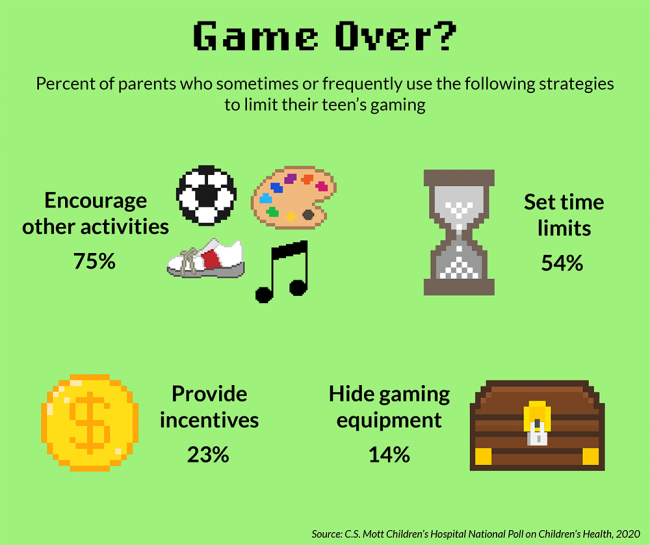 Video gaming is a frequent point of discussion, and sometimes tension, in families with teens. In a world where children are “growing up digital,” parents can play an important role in helping their teens to learn healthy concepts of gaming. This Mott Poll found that many parents believe gaming has the potential to have both a positive and negative impact on their teen, yet have concerns regarding the amount of time spent gaming.

This Mott Poll also found that many parents of frequent gamers may not be realistic about the extent of their teen’s gaming, believing instead that the amount of time their teen spends gaming is similar to other teens. Video games are specifically designed to encourage prolonged play among teens; many have rewards or feedback at specific intervals to maintain engagement. Moreover, some teens — such as those with attention issues — are especially susceptible to the constant positive feedback and the stimulus of video games, especially virtual reality games.

Parents reported a number of negative impacts of prolonged teen gaming. One of the most critical consequences is the potential for sleep deprivation. Other frequently expressed concerns were the potential impact of gaming on family and peer relationships and on school performance.

Gaming, like all other teen activities, should have reasonable limits. Parents should discuss the limits they establish and the reasons for them. Helping teens to understand that rules around gaming are not arbitrary, but are tied to safety, health, school and relationships can be helpful. One strategy that parents can try is playing games with their teen. Showing your teen you are interested in what they are playing and want to understand their interest can help in communicating healthy limits. In some situations, games can serve as a point of connection and occasionally may be structured as a family activity to open the door to other conversations and foster interaction.

Most experts advise it is a mistake to suggest to teens that gaming is just “mindless entertainment.” Teens believe many of the games they play are not mindless. Many are complex and challenging, and that’s often a big part of their appeal. Some kids believe the mental workout and knowledge they gain from their games justifies all the time they’ve invested.

To some teens, the appeal of online gaming is a combination of easy access to play with many other people, and the opportunity to watch other players to glean tips on how to improve their performance in a game. However, parents need to remind teens that a game’s privacy settings often do not actually make things “private.” As a result, images, thoughts, and behaviors teens share online will instantly become a part of their digital footprint. Adults can pose as teens in shared gaming environments and try to establish relationships that can lead to exploitation. Parents should work to keep lines of communication open with their teen about this aspect of online activity and let them know they can be a resource if they have questions or concerns.

For many parents in this Mott Poll, there was concern about the potential content of gaming. Many parents said they used rating systems to try to prevent specific content they find objectionable. The Entertainment Software Rating Board (ESRB) ratings are designed to provide information about video and computer game content to help parents make informed purchasing decisions.

Video games are a part of our world today. However, time spent gaming should not be at the expense of face-to-face time with family, friends, and teachers who play a pivotal and important role in promoting a teen’s learning and healthy development.

This report presents findings from a nationally representative household survey conducted exclusively by Ipsos Public Affairs, LLC (Ipsos) for C.S. Mott Children’s Hospital. The survey was administered in August 2019 to a randomly selected, stratified group of adults who were parents of at least one child age 0-18 years living in their household (n=2,004). Adults were selected from Ipsos’s web-enabled KnowledgePanel® that closely resembles the U.S. population. The sample was subsequently weighted to reflect population figures from the Census Bureau. The survey completion rate was 60% among panel members contacted to participate. This report is based on responses from 963 parents who had at least one child age 13-18 years. The margin of error for results presented in this report is ±3 to 6 percentage points.