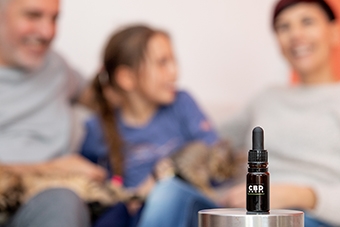 CBD is short for cannabidiol, a chemical compound naturally found in marijuana and hemp. CBD is sold as oils, balms, gummies and other products. The C.S. Mott Children’s Hospital National Poll on Children’s Health asked a national sample of parents of children 3-18 years about the use of CBD in children.

Parents say the factors that would be very important in deciding whether to give their child a CBD product are side effects (83%), if it was tested for safety in children (78%), how well it works in children (72%), recommendation of their child’s doctor (63%), approval of the US Food and Drug Administration (58%), and product reviews (41%). 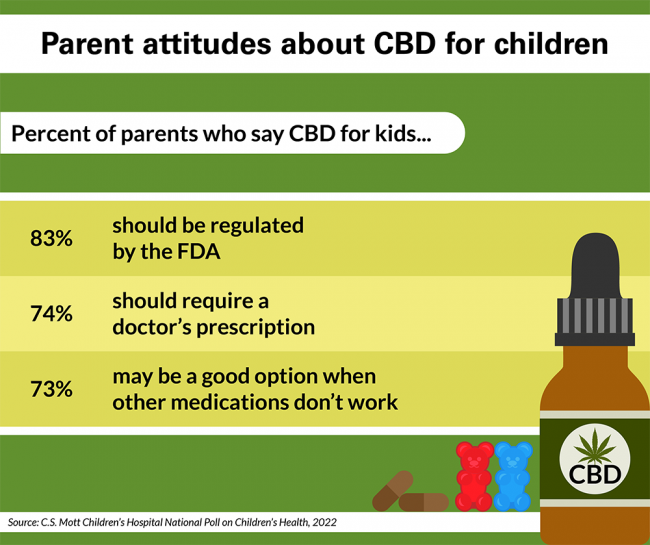 Products containing cannabidiol (CBD) are sold online and in stores that specialize in CBD products, as well as in supermarkets and drugstores. CBD products come in many forms, including oils, topical ointments, tinctures, vaping, edibles and gummies. Some CBD products are marketed for children.

This Mott Poll demonstrates that even though CBD products are widely available, parents have limited knowledge about them and most have not even considered having their child use a CBD product. However, three-quarters of parents appeared to be open-minded about CBD products as an option when other medications don’t work.

Parents also demonstrated some inconsistencies in their attitudes about CBD products for children, including the regulation of these products. For example, 83% indicated CBD products should be regulated by the US Food and Drug Administration (FDA), yet only 58% rated FDA approval as very important to their decision about using CBD for their child. Currently, only one CBD product has received FDA approval for use in children, as a treatment for a rare form of epilepsy. It’s unclear if parents recognize that none of the CBD products they see in stores are regulated by the FDA.

Parents indicated that side effects were their top consideration in determining whether they would have their child use a CBD product. There have been some reports of CBD’s side effects, including sedation and generalized fatigue, insomnia, and gastrointestinal disturbances. However, because CBD products have not undergone rigorous testing to achieve FDA approval, the rate and severity of side effects is unclear -- both for short-term side effects like nausea, vomiting and abdominal pain, as well as potential long-term effects like liver toxicity. Other side effects may occur if CBD causes an interaction with other medications the child is taking. Because of the relatively low use of CBD products in children, their side effects in children are even less known or understood.

One-third of parents in this Mott Poll believe that taking CBD is basically the same as using marijuana, which is consistent with parents’ overall limited knowledge about CBD products. Marijuana contains a psychoactive substance, tetrahydrocannabinol (THC), that produces the “high” effect. To be legal under the federal Controlled Substances Act, CBD must have less than .3% of THC. Many CBD products purport to contain close to 0.0% THC. However, the lack of regulation of CBD products calls into question whether there is sufficient quality control in the production of various products to ensure that the amount of THC is consistent with what is reported on the product labeling. Thus, it is difficult for parents to know exactly what they are buying and how much THC their child may be exposed to.

A small but not negligible proportion of parents have given or considered giving their child a CBD product. Parent report of CBD use for children reflected the conditions noted in many CBD promotional materials, including anxiety, sleep problems, ADHD, autism, and seizures. A subset of parents considered CBD products to make their child feel better in general, not targeting any particular symptom or condition.

The role of child health providers in directing CBD use is another area of inconsistency highlighted in this Mott Poll. Although three-quarters of parents felt CBD for children should require a doctor’s prescription, only 63% rated the recommendation of their child’s doctor as a very important factor in deciding whether to give their child a CBD product. Moreover, among parents who tried or considered CBD for their child, only 29% discussed the topic with their child’s healthcare provider. It’s important for parents to inform their pediatrician or other healthcare providers about use of CBD products so that any potential side effects can be addressed.

This report presents findings from a nationally representative household survey conducted exclusively by Ipsos Public Affairs, LLC (Ipsos) for C.S. Mott Children’s Hospital. The survey was administered in October 2021 to a randomly selected, stratified group of adults who were parents of at least one child age 1-18 years living in their household (n=2,020). Adults were selected from Ipsos’s web-enabled KnowledgePanel® that closely resembles the U.S. population. The sample was subsequently weighted to reflect population figures from the Census Bureau. The survey completion rate was 61% among panel members contacted to participate. This report is based on responses from 1,992 parents with at least one child age 3-18. The margin of error for results presented in this report is ±1 to 2 percentage points and higher among subgroups. 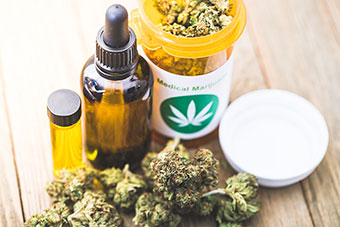 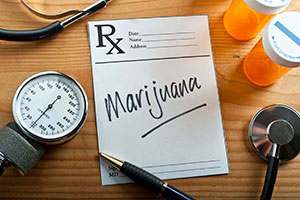