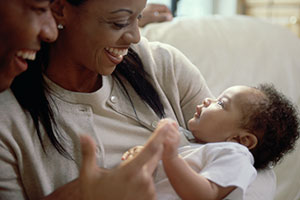 However, it is not clear whether breastfeeding classes are supporting parents from diverse backgrounds. In November 2013, the C.S. Mott Children’s Hospital National Poll on Children’s Health asked a national sample of parents with young children (0-3 years old) whether they had attended a breastfeeding class.

There were no differences in breastfeeding class participation rates related to parents’ racial/ethnic backgrounds, household income level or education level. 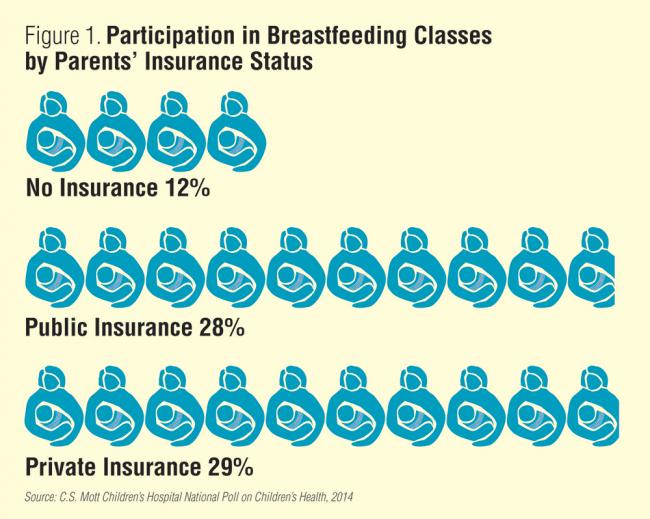 Breastfeeding has many benefits for mothers and their children, and therefore it is strongly encouraged by many health professionals and public health officials.  However, breastfeeding rates in the US are far below target levels. In this Poll, we examined participation in breastfeeding classes as a window on why rates of breastfeeding are low.

However, parents who were uninsured at the time of the survey were substantially less likely to have participated in breastfeeding classes than other parents who were insured—whether through private insurance plans or public programs. It is not clear what the insurance status of the mother or parents was at the time that a breastfeeding class may have been offered to them. However, we know from other studies that uninsured parents of young children were likely uninsured before the pregnancy, too. That means that, even if the mother was covered with Medicaid during the pregnancy, the parents may not have been as familiar with how to access special benefits like breastfeeding classes that are often offered.

Prior studies have shown that African Americans, low-income and less educated mothers are less likely to breastfeed, while this poll shows no difference in breastfeeding class attendance by racial/ethnic groups, income or education. This suggests that, even when parents attend, breastfeeding classes may not be meeting the unique needs of all parents. Future studies are needed to find out which breastfeeding classes are most culturally relevant and are most successful at promoting breastfeeding.

Overall, low rates of breastfeeding class participation among uninsured parents raise questions about access, support, and navigating services during pregnancy for parents without coverage, or whose insurance coverage is inconsistent. To be more successful at supporting breastfeeding, classes must be accessible and affordable to all parents.

This report presents findings from a nationally representative household survey conducted exclusively by GfK Custom Research, LLC (GfK), for C.S. Mott Children’s Hospital via a method used in many published studies. The survey was administered in November 2013 to a randomly selected, stratified group of parents 18 and older with a child age 0-3 (n=452) from GfK’s web-enabled KnowledgePanel® that closely resembles the U.S. population. The sample was subsequently weighted to reflect population figures from the Census Bureau. The survey completion rate was 54% among the parent panel members contacted to participate. The margin of error is ± 5 percentage points and higher among subgroups.