Teen drivers are at the highest risk for crashes and crash-related fatalities. Teens are particularly vulnerable to distractions while driving.

In September 2015, the C.S. Mott Children’s Hospital National Poll on Children’s Health asked parents of teens 13-18 years old and teens themselves about limits placed on driving circumstances that can increase a teen driver’s risk of a crash.

About 9 in 10 parents report they place at least one limit on their teen drivers.  Limits on cell phone use include:

Limits on passengers include:

Limits on driving times/locations include: 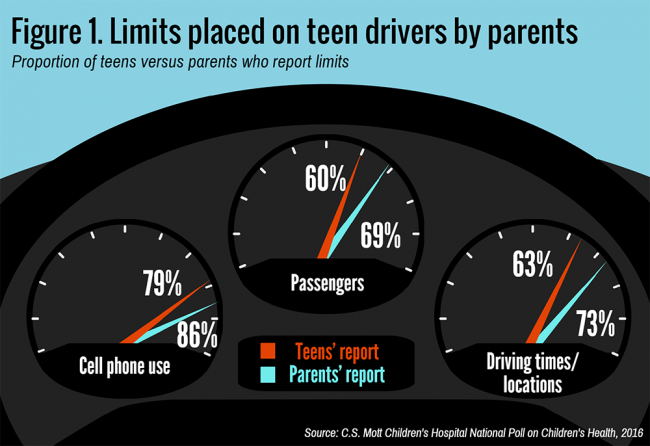 Parents play a key role in promoting the safety of their teens by setting rules and expectations for driving. We found the great majority of parents place some limits on their teen drivers. Limits on cell phone use and texting while driving are most commonly reported by parents and their teens. Fewer limits are set on passengers and driving times/locations. As many as one-quarter of parents report placing no limits on teen passengers or nighttime or highway driving, suggesting opportunities to increase teen driver safety by encouraging parents to place limits on these high-risk driving conditions.

Parents reported greater variation in the limits set on passengers and driving times/locations than cell phones in relation to their perception of their teen drivers’ skills. This may reflect parent awareness of, and agreement with, state graduated driver licensing (GDL) procedures, which exist in some form in nearly every state. GDL laws limit cell phone use/texting (at least 38 states), number of teen passengers (46 states), and nighttime driving (at least 48 states) for teens who have limited driving experience.

There was greater agreement between parents and teens on limits placed on cell phones than on passengers or driving times/locations. This may indicate that parents communicate to their teens more clearly their expectations around cell phone use while driving than for other driving situations. It is also possible that parents and teens have greater awareness of the risks of using cell phones while driving, due to media attention on cell phone distractions as a common cause of crashes. The higher degree of disagreement between teens and parents in relation to the limits set for passengers and driving times/locations suggests the need for more dialogue in families to ensure rules and expectations around driving are understood. Written parent-teen driving agreements are one way for parents to clearly communicate rules and expectations.

This report presents findings from a nationally representative household survey conducted exclusively by GfK Custom Research, LLC (GfK), for C.S. Mott Children’s Hospital via a method used in many published studies.  The survey was administered in September 2015 to a randomly selected, stratified group of parents age 18 and older with at least one child age 13-18 (n=1,517); among a subset of these parents, their teens also responded to teen-focused questions related to driving (n=268). Parents were selected from GfK’s web-enabled KnowledgePanel® that closely resembles the U.S. population. The sample was subsequently weighted to reflect population figures from the Census Bureau. The survey completion rate was 40% among panel members contacted to participate. The margin of error is ± 2 to 6 percentage points.