Health apps are computer application programs on smartphones or tablets that offer interactive games and provide education or motivation about health topics. Most health apps are targeted to teens or adults, but their use among tweens (children 8-12 years old) is not well understood. The C.S. Mott Children’s Hospital National Poll on Children’s Health asked a national sample of parents of tweens about their experiences with and views on health apps.

Nearly half of parents (46%) have used a health app themselves, but only 5% of parents say their tween is using health apps. Most parents (71%) agree that using an app can help tweens develop good health behaviors. Parents’ views are mixed (56% agree, 44% disagree) on whether they believe tweens are more willing to learn about health through apps than from their parents.

Among parents whose tween currently uses health apps, 63% say that those health apps collect data about their tween. Nearly all think the data is seen by parents and the tween, while only 13% think advertisers see data from the health app. 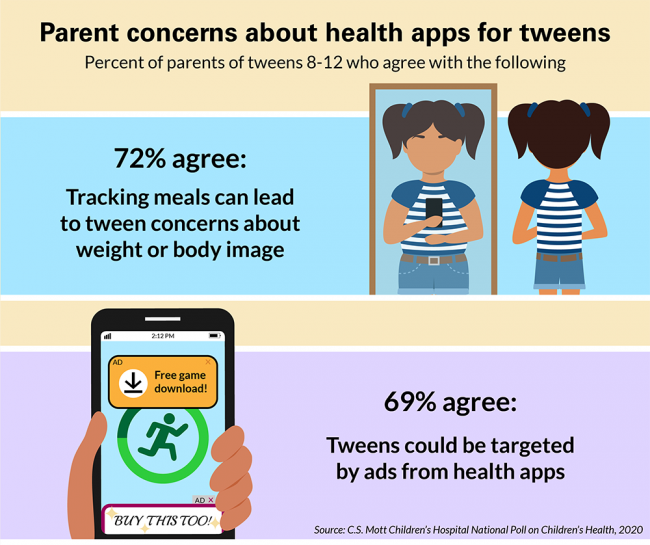 Health apps include games that teach about health, as well as devices that track health data, such as the amount of calories consumed or burned, exercise intensity, sleep and wake time, and menstrual cycles. Many apps allow users to set goals and give feedback on progress, as well as motivational messages or tips to improve health behaviors.

Nearly half of parents in this Mott Poll use or have used health apps, and most parents feel that health apps can help tweens develop good health behaviors. Yet many parents have concerns about the advertising that could reach their tween through health apps. One concern may be that tweens would use apps designed or targeted for teens or young adults; advertisements targeted to these older ages may involve alcohol, sexual activity, or other representations that are not appropriate for tweens.

Another aspect of parent concern may be targeting tweens for their own purchasing power. Apps are considered targeted to children if they include animated characters, celebrities, music or audio content that appeals to children. Apps targeted to children must comply with the Children’s Online Privacy Protection Act of 1998 and the General Data Protection Regulation (2018), both of which guard against the collection of data without permission from parents or guardians. Despite these laws, research has shown that many apps contain advertising, and collect and share personal information without verifying the age of the user or gaining parent consent.

Parents who have privacy concerns about health apps may want to spend some time reading the fine print. Health apps have user agreements that detail whether data are shared with third parties. Some apps have permissions that allow parents and tweens to choose whether or not the app can collect and share information with a third party. Some companies allow users to file a “Do Not Sell” request for the app.

Another important consideration is the device the tween would use for the health app. Parents should look into the specific features of smartphones, tablets, and other devices to determine which offers the best array of privacy features. With some devices, parents can block or limit specific apps and features, or restrict the settings for explicit content, purchases and downloads.

The appropriateness of health apps for tweens is debatable for other reasons. Nearly three quarters of parents in this Mott Poll feel that having tweens track what they eat can lead them to become too concerned about their weight or body image. Before tweens begin using a health app that tracks food or calorie intake, parents should encourage their tween to talk about why they’re interested in tracking their food or calorie intake. Parents might consider using a similar health app for themselves, as a way to maintain a dialogue about tracking health data. This can lead to “teachable moments” that allow parents to reinforce the notion that people grow at different rates, and that being healthy does not mean the same weight or body shape for everyone.

Parents in this Mott Poll expressed a desire to get input about health apps from their tween’s health care provider, but only 3% had talked with a provider about this topic. It is unclear whether providers recognize health apps as a topic of interest to parents and tweens. In light of research that eating disorders can begin during the tween years, child health providers should be prepared to talk with parents and tweens about how to be healthy, and how apps may be one strategy to emphasize that being healthy involves a varied diet and regular exercise, done in moderation. 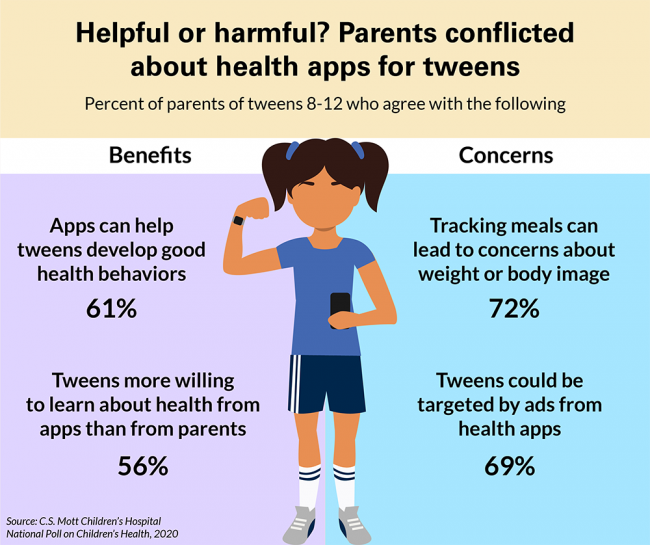 This report presents findings from a nationally representative household survey conducted exclusively by Ipsos Public Affairs, LLC (Ipsos) for C.S. Mott Children’s Hospital. The survey was administered in January-February 2020 to a randomly selected, stratified group of adults who were parents of at least one child age 0-18 years living in their household (n=2,016). Adults were selected from Ipsos’s web-enabled KnowledgePanel® that closely resembles the U.S. population. The sample was subsequently weighted to reflect population figures from the Census Bureau. The survey completion rate was 60% among panel members contacted to participate. This report is based on responses from 832 parents who had at least one child age 8-12 years. The margin of error for results presented in this report is ±1 to 4 percentage points and higher among subgroups. 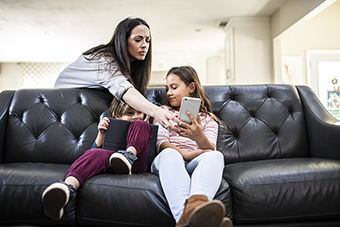