When parents refuse all vaccines for their child, that child is unprotected against many vaccine-preventable diseases, and also poses a risk of transmitting diseases to others. Our August Mott Poll report asked parents of children 0-18 years old about their awareness of current policies, and preferences for future actions, in how their child’s primary care office handles the subset of parents who refuse all vaccines for their children, even after multiple discussions. Parents and media across the country have been discussing policies and preferences for how doctor’s offices should handle these situations. Here’s a roundup of the conversation.

About 4 in 10 parents in the Mott Poll do not know whether their child’s primary care provider has a policy for unvaccinated patients. This was featured in a HealthDay article, Many parents would switch doctors over vaccination policy, poll finds. Reporter Robert Preidt notes that awareness of unvaccinated children in the practice might prompt some parents to switch providers. “Parents may assume that when they take their child to the doctor, they are in a setting that will not expose their child to diseases,” said Mott Poll co-director Sarah Clark, MPH. “Parents may not have considered that there could be another child in the waiting room whose parents have refused all vaccines.”

If their child’s provider saw unvaccinated children in the practice, 41% of parents in the Mott Poll are very or somewhat likely to switch providers. This was highlighted in a Forbes piece, New survey shows many people think their doctors should refuse to see unvaccinated children. Reporter Victoria Forster mentioned the importance of parents becoming informed about the vaccine policies at their child’s primary care office. “When prompted to think about it, most parents want the doctor’s office to have some policy to limit the risk from unvaccinated children,” said Clark. “Primary care providers need to think carefully about whether to institute policies to prevent their patients from being exposed to vaccine-preventable diseases, and then communicate those policies to all patients in their practice.”

Protection against infection and misinformation

Seven in 10 parents in the Mott Poll say their child’s primary care office should have a policy to prevent completely unvaccinated children from infecting other patients. Reporter Kashmira Gander highlighted this finding in a Newsweek story, Children of anti-vaxxers whould have access to doctors’ offices restricted, say almost 75% of parents. “Three-quarters of parents want their child’s healthcare provider to place some type of restriction on children who are completely unvaccinated—either leave the practice, don’t use the waiting room, or wear a mask,” said Clark. “This indicates that parents recognize that there is a real risk of disease transmission.” Clark also recommended that parents talk to their child’s providers or local public health department about any questions or concerns they may have, and emphasizes that parents should “avoid YouTube, Facebook, or other known sources of misinformation about vaccines.” 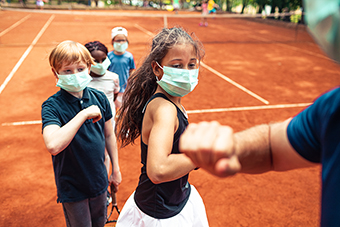 Playing through a pandemic: Youth sports and COVID