Many parents wary of online ratings for doctors 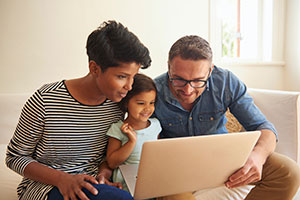 Many parents wary of online ratings for doctors

The recent explosion of online rating sites includes a variety of goods and services – including health care providers. Although doctor rating websites are readily available, parents may wonder if those ratings are trustworthy. To better understand parents’ thoughts and concerns, we asked a national sample of parents in January 2016 about their views of doctor rating websites.

Nearly one-third (30%) of parents report looking at online doctor ratings for themselves or a family member in the past year, with mothers (36%) more likely than fathers (22%) to visit such sites. Among these parents, two-thirds say they selected or avoided a doctor based on the ratings they viewed. Among parents who choose doctors based on the ratings, most (87%) say the online ratings accurately reflect their experience with the doctor.

However, the majority of parents have concerns about doctor rating websites in general (Figure 1). About two-thirds of parents believe some ratings may be fake; slightly fewer feel there are not enough ratings on the websites to make a good decision. More than half of parents feel doctors may influence who leaves ratings. Indeed, among parents in this survey who had ever left an online rating about a doctor (11% overall), nearly one-third (30%) reported that the doctor or office staff had asked them to do so. 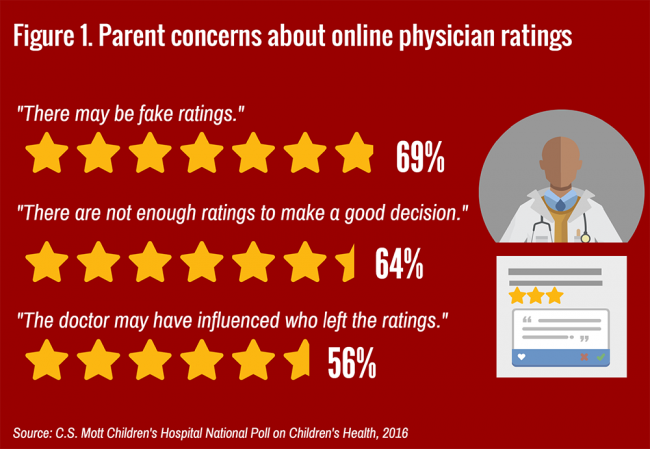 In this latest Poll, one of every three parents has looked online for ratings about doctors for themselves or a family member. This suggests that online rating sites are a common source of information for parents as they choose a doctor.

However, concerns about these sites may be preventing parents from using them more broadly. The majority of parents expressed serious concerns about doctor rating websites that call into question the objectivity and authenticity of ratings. For example, most health care rating websites have a low number of reviews or ratings per doctor, which suggests they may not represent the full range of patient experiences. Another major concern is that doctors may choose to invite only certain patients to leave ratings, which could skew results. This is borne out in this poll where one-third of parents who have left ratings said a doctor or staff asked them to do so. Some of the concerns endorsed by parents appear valid. Parents report that doctors are encouraging parents to leave ratings, and with only one in ten parents leaving a rating, ratings may not be fairly representative.

It may not be practical for parents to distinguish real from fake posts on doctor rating websites, but some sites have implemented ‘closed-loop’ ratings, meaning that the identity of each reviewer is verified by the website. This may help alleviate some of the concerns related to fake ratings, but it also means that fewer doctors will be listed since they have to opt in and become an active participant in the ‘loop’.

While the use of online physician rating sites is expected to keep rising, their growth may be limited by concerns from parents about accuracy and authenticity. Innovations such as closed-loop reporting may lessen some of these concerns, but doctors will have to become more engaged and willing participants in the ratings process for such online rating sites to become more widely accepted.

This report presents findings from a nationally representative household survey conducted exclusively by GfK Custom Research, LLC (GfK), for C.S. Mott Children’s Hospital via a method used in many published studies. The survey was administered in January 2016 to a randomly selected, stratified group of parents age 18 and older with at least one child age 0-17 (n=1,407). Parents were selected from GfK’s web-enabled KnowledgePanel® that closely resembles the U.S. population. The sample was subsequently weighted to reflect population figures from the Census Bureau. The survey completion rate was 54% among panel members contacted to participate. The margin of error is ± 2 to 9 percentage points. 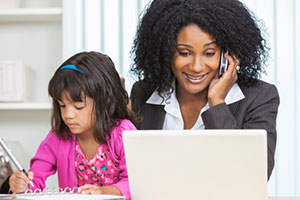 How to select a child’s doctor? Parents prefer grapevine to online