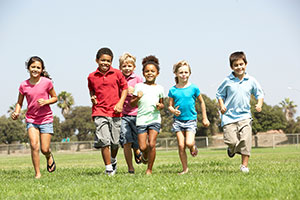 In this year’s sixth annual survey of top health concerns conducted by the C.S. Mott Children’s Hospital National Poll on Children’s Health, adults rate ‘not enough exercise’ as the leading health concern for children in their communities. Childhood obesity and smoking and tobacco use were the second and third most commonly identified child health problems by adults across the United States.

As in past years, many of the top 10 health concerns relate to health behaviors for children and teens: exercise, childhood obesity, smoking and tobacco use, drug and alcohol abuse, teen pregnancy and bullying. Top health concerns this year also include stress, internet safety and child abuse and neglect.

‘Not enough exercise’ is new to the top of the list of biggest child health problems, as measured in the Poll. From 2007 to 2011, childhood obesity, drug abuse and smoking have consistently been rated as the top 3 health problems for kids from the perspective of adults (not just parents) across the United States.

Similar to past editions of the top 10 list in the National Poll on Children’s Health, adults from different race/ethnicity backgrounds expressed different views about the top child health concerns in their communities, as shown in Figure 2.

Black adults differed from Hispanics and whites in their comparatively high level of concern about smoking and tobacco use, racial inequality, gun-related injuries and unsafe neighborhoods.

Black and Hispanic adults both identified sexually transmitted infections as a greater concern for kids in their communities than did white adults.

Despite these differences, Hispanic, black and white adults agreed that ‘not enough exercise’ and obesity are two of the top three most pressing health concerns for kids in their communities. Other concerns that made the top 10 in all three groups included drug abuse, smoking and tobacco use, bullying, and teen pregnancy. 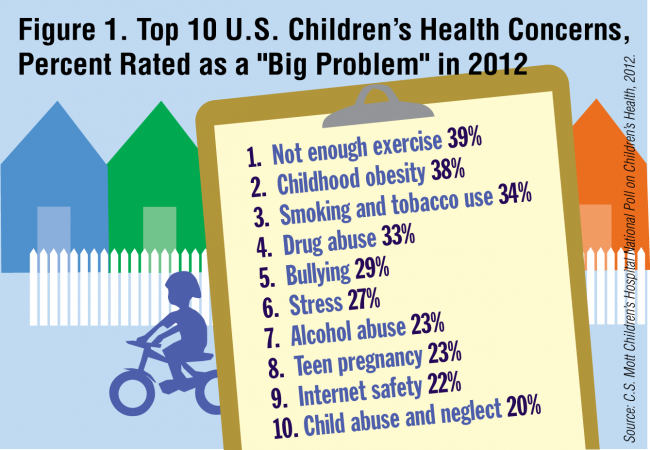 Every summer, the National Poll on Children’s Health reports the views of the American public about child health issues across the country, as a way to help set program priorities in medicine and public health and help officials see whether messages about specific health risks for children are reaching the public.

Results of this latest Poll indicate that adults now see lack of exercise for U.S. children as the health problem of greatest concern. While lack of exercise is certainly linked to the second most commonly identified concern—childhood obesity—exercise is a notable new top concern in the Poll’s annual top 10 list for two reasons. First, the strong perception that lack of exercise is a threat to children’s health may reflect effective recent public health messages from programs such as First Lady Michelle Obama’s “Let’s Move” campaign. Second, exercise has other benefits besides prevention of obesity—such as better attention and learning in school and improved sense of well-being.

The strong connection of many of the top 10 child health concerns to health behaviors among children and adolescents underscores the importance of public programs and communication initiatives—for example, those designed to prevent drug abuse, tobacco use, alcohol abuse and teen pregnancy. Given the high level of public concern about these health problems for youth, it is likely such programs will receive public support but also high public expectations for progress in prevention.

Findings from this Poll also reflect varied perspectives about child health concerns by race/ethnicity. For example, while Hispanic adults were more likely than black or white adults to express concerns about bullying and stress, black adults expressed greater concerns about racial inequality, gun-related injuries and unsafe neighborhoods, and white adults were comparatively more concerned about child abuse and neglect in their neighborhoods. Such differences of perspective offer key insights into ways that child health varies across communities, and emphasize a need for local programs that respect and address community-specific health priorities for youth. 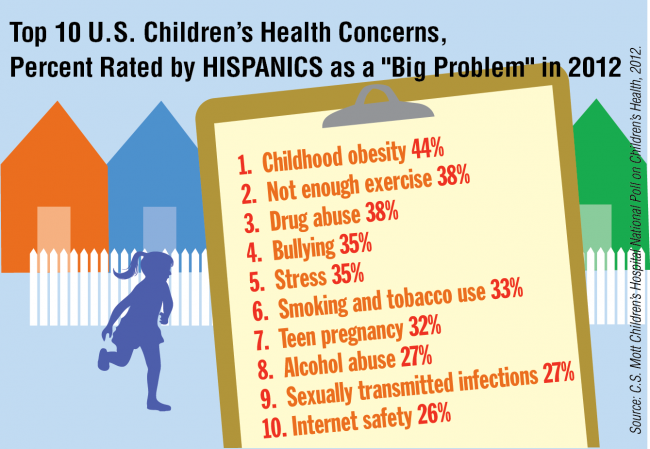 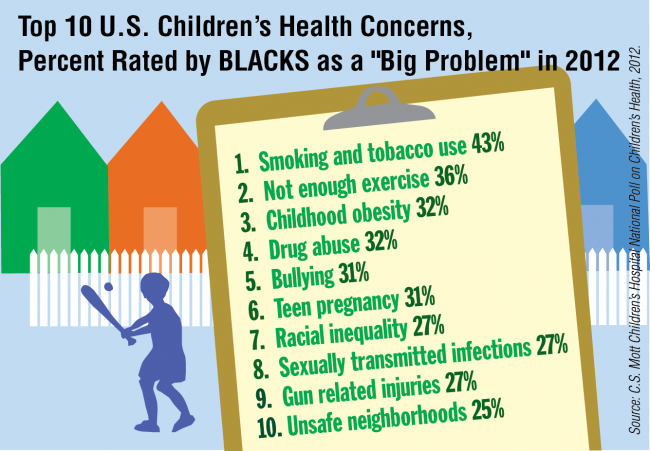 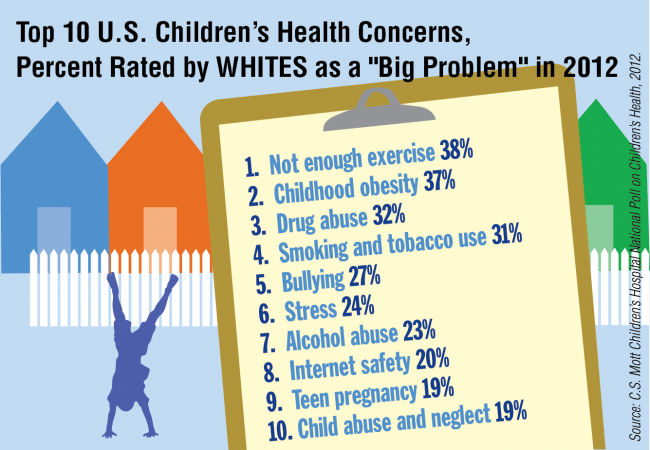 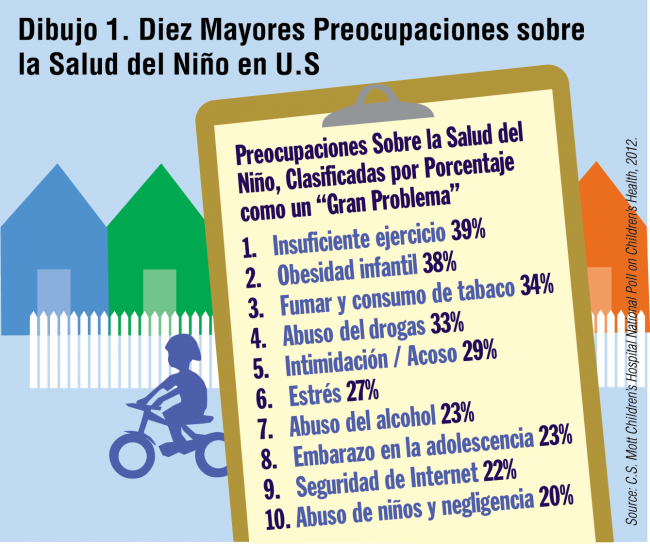 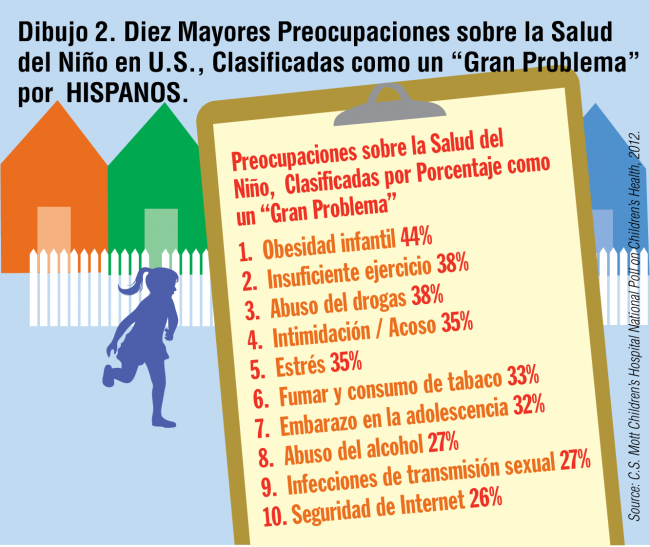 This report presents findings from a nationally representative household survey conducted exclusively by GfK Custom Research, LLC (GfK), for C.S. Mott Children’s Hospital via a method used in many published studies.  The survey was administered in May 2012 to a randomly selected, stratified group of adults age 18 and older (n=2,144) from the GfK’s web-enabled KnowledgePanel® that closely resembles the U.S. population. The sample was subsequently weighted to reflect population figures from the Census Bureau. The survey completion rate was 62% among panel members contacted to participate. The margin of error is ± 2 to 4 percentage points and higher among subgroups.